PRE-FESTIVAL EVENTS LAUNCHED IN COMMUNITIES ACROSS THE STATE 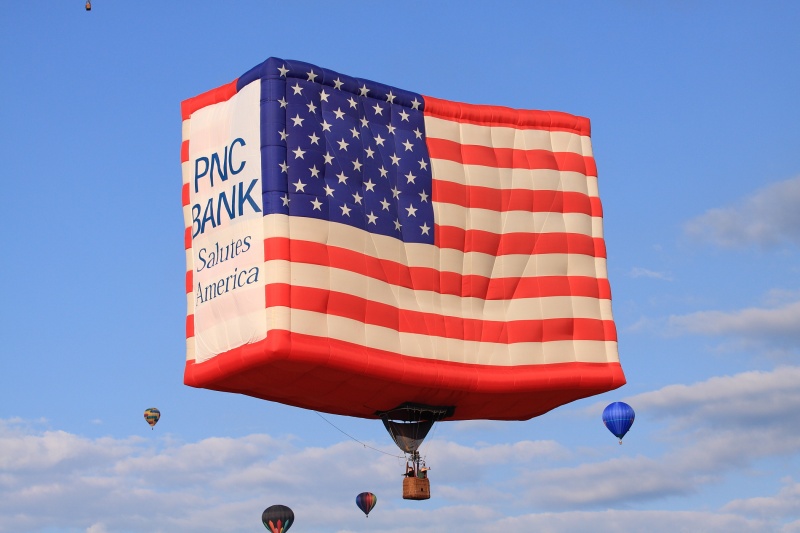 “Working together with PNC Bank the past 12 years helps us produce many wonderful outreach programs throughout the state,” said Festival Executive Producer Howard Freeman. “We created the PNC Salutes America special shaped American Flag hot air balloon the first year, the American Patriot Essay Contest the next year, and then we added a balloon into their Grow Up Great pre-school program.”

“All of these programs are still going strong,” added Freeman. “PNC is a great example of how a company maximizes its sponsorship of the Festival to deliver their messages and get the most out of their corporate affairs programs throughout the year.”

“The uniqueness of hot air ballooning adds an exciting element to our community initiatives,” said Joseph Whall, PNC Senior Vice President & Director of Client and Community Relations. “The festival is certainly a great, three-day, family fun event, but from our sponsor’s perspective, it’s much more than that. We have a whirlwind of activity taking place throughout the months leading up to the festival. For us, it’s more like a great four-month event.”

PNC Bank’s sponsorship starts with the 11th annual American Patriot Essay Contest, for which thousands of New Jersey students in primary, middle and high school write about “What the American Flag Means to Me.” Special events introduce pre-school children to the science of ballooning under PNC’s Grow Up Great initiative.

PNC Bank and the Festival launch the nation’s Independence Day celebrations in July when the 5-story tall PNC American Flag balloon, the largest free-flying American flag in the world and one of the signature balloons of the Festival, takes a tethered flight in Hoboken.

Freeman notes that the Festival offers marketers the opportunity to rise above the clutter in the heavily saturated New York-Philadelphia media market to reach the Festival’s highly desirable family audience through innovative marketing programs and signage on 75 foot tall balloons as they fly during six scheduled mass ascensions.

Title sponsor QuickChek builds a 2,700 square-foot store complete with its newest menu items on site and demonstrates its award-winning customer service with a huge family hospitality tent.
Volkswagen America showcases new vehicles and sponsors the Volkswagen Blue Sky VIP Club which provides priority viewing along the Balloon Launch Field. Gatorade provides branded beverages for participants in the Running with the Balloons 5K. The Bridgewater Commons shopping center sponsors the Kids Club. Miller will once again be titling the Leinie Lodge and offering music patrons great views adjacent to the concert stage while serving a variety of craft and high quality beer brands.
To learn more about Festival sponsorship and marketing opportunities, please call 973-882-5464 or visit online at www.balloonfestival.com.