Then and Now:  Why Summer Camp is More Important than Ever Before

Our children are growing up so much differently than we did, with so much of their lives spent staring glowing screens, accessing most any piece of information through their fingertips in seconds. But while we are more connected to everything and everybody through technology, we are far less connected to each other on a personal level than ever before.

For thousands and thousands of years we made friends organically, until about 15 years ago, when we began meeting people through MySpace, then Facebook, Instagram, and video game headsets. We used to be able to get from one place to another without our screens directing us. While we used to play outside after school, and all day on the weekends and during the summer- now most neighborhoods look like outdoor ghost towns. Where are the children? Oh, we know where most of them are… Staring at their glowing screens.

Don’t get me wrong, I love IMDB, YouTube, the Red Zone channel, and seeing my high school friends’ kids grow up, but experts agree that as a human race, we are quickly losing our social/relationship skills, simply because we aren’t using them with much frequency anymore. If you don’t use it, you lose it. And with our kids, if they never do it, they’ll never learn the social skills necessary for life.

NOT THEIR FAULT, OURS

I was at an NFL tailgate party recently, one of the last bastions of old-school socializing, watching a 10 year old boy mercilessly begging his parents for his iPad, and then proceed to sit in the car for an hour playing games on it. Not his fault- his parents’ enabled the behavior. When 23% of BABIES have TVs in their rooms, and 25% of kids under age 6 own a smartphone-type device with internet access, how can we be surprised that this is what so many children have become (Page, Cooper, Griew, Jago 2010.) Research shows that screen time in children leads to increased inattention, anxiety and depression (Journal of Educational Psychology, 2010.) Just like too much sugar suppresses the immune system, too much screen time is suppressing our children’s brain development.

8 to 18 year olds consume an average of over 7 hours of screen media per day, often while multi-tasking, a statistic that has increased 2.5 hours in the past 10 years. Their excessive screen time is linked to emotional and behavior problems, and difficulty with peers and school. A sign of the times, or lazy parenting? A 2010 Kaiser Foundation study found that 8 out of 10 parents DO NOT monitor their children’s screen time. Parents come home after long days of work and don’t want to spend the precious little time they have arguing with their kids to put away their devices. Weekends and Summers, the majority of a child’s waking hours can be spent staring at glowing screens.

If technology is a drug, we parents are the dealers. The research company “dscout” found that the average adult touches, swipes or clicks their phone 2,617 times per day. The top 10% over 5,000 per day! We are living in a state of what researchers describe as “continuous partial attention,” as humans (no matter what we may think) are simply unable to pay full attention to any one thing when our phone are within reach. We all need to put our phones away, and give our kids (and our life) our full attention.

I Just Want my Kids to be Happy

A multi-year study of 50,000 high schoolers led by noted author/researcher Jean Twenge, showed unequivocally that the happiest kids use screens less than an hour per day, and that teens who spend more time in face-to-face, in-person interaction with friends are happiest. It turns out there is an inverse relationship between happiness and time spent on screens for our children. We need to have the discipline and commitment to do what is best for our kids in the long run. So how and where can we distract kids from their screens while giving them the best opportunity to grow into good people and contributing members of society? Two words:

Traditional, outdoor, hot, sweaty, buggy, muddy, Summer Camp. Because, simply put, Camp is the antidote to the traps of modern society. Camp is like a vitamin supplement of the vital things our kids’ lives are missing: Face to face interactions, collaborating in groups, and navigating the ups and downs of relationships. It’s also a place where kind, caring people other than parents teach life skills like making friendships, integrity, self-regulation and independence. At my Camp it’s simple: Electronics are strictly forbidden. While at first the kids (and staff) may complain, in the end they literally thank us. They cry tears of joy as they hug their friends and counselors on their last day of Camp, eager to return the next summer to a magical utopia where they can be their authentic self, and not an avatar jonesing for their next social media dopamine hit.

In the 25 years that I’ve been running summer camps, I am seeing the pendulum swinging back to a sense of normalcy with today’s parents. The last generation was overwhelmed by the onset of internet technology, combined with the “everyone gets a trophy” mentality, and keeping our precious offspring air conditioned and sheltered from challenges. Fast forward to today, and young parents see the mistakes of the past, work with incorrigible 20-somethings, and want no part of it for their own children. They want their kids outdoors, conquering challenges, tolerating frustrations, meeting new people, and empathetically working with others.

The new generation is also less concerned about money/materialism, and more about gaining new experiences, and being good people- two things that good Camps specialize in. Every year, foreign parents send tens of thousands of their kids overseas to hundreds of American Summer Camps- they understand the value of Camp. Savvy city people get it, bussing their kids to camps in droves like never before. Yet McMansion suburbanite parents who never went to Camp themselves are slow to take the leap. Look at the stats, look at your kids! Summer Camp is more important now than ever before, filling the societal gap left by institutionalized schools, busy parents and glowing screens!

Andy Pritikin is the Owner/Director of Liberty Lake Day Camp, and Past President of American Camp Association NY/NJ  www.LibertyLakeDayCamp.com

Sports Camps 2022 In and Around New Jersey

Special Needs Camps 2022 In and Around New Jersey 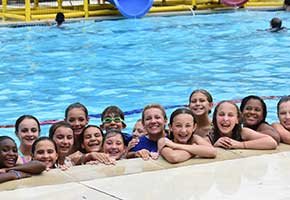 Summer will be here before you know, and many parents are trying to figure out the best option for…

Summer is an important time of the year for all kids, and camp is one of the most amazing…