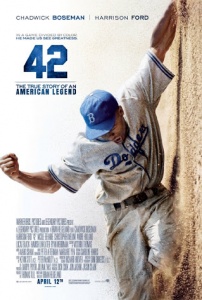 SYNOPSIS: This amazing film tells the story of baseball player Jackie Robinson and his history-making contract with the Brooklyn Dodgers under the guidance of team executive Branch Rickey.

Sex/Nudity: A few marital kisses and scenes of Jackie and his wife in their bedroom talking and hugging. An adulterous affair causes a team manager to be suspended. One scene shows him in bed with a woman; he's talking on the phone and she's making risque remarks to him. 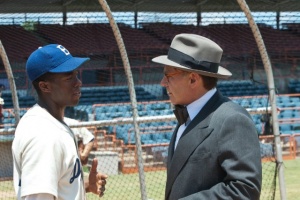 Violence/Gore: An opposing pitcher hits Jackie in the head with a fast ball, which nearly results in a brawl on the field. While in Florida for spring training, Jackie is threatened by a man who tells him a group of men will cause trouble if he doesn't leave town. A hotel manager refuses to let Jackie and the team stay there, which results in a huge argument and brawl. After the racist Phillies manager hurls insults at him, Jackie gets enraged and privately breaks his bat in several pieces. An opposing player spikes Jackie's calf at first base, and later we see a doctor sewing his leg up.

Profanity: A few uses of "sh*t," "a**hole," "hell," "damn," "son of a bitch," and "ass." Jackie is the target of racism from both his teammates and other people. An overly racist team manager of the Phillies ridicules Jackie publicly and calls him a string of offensive names, including the "N" word, "boy," "coon," and "monkey." 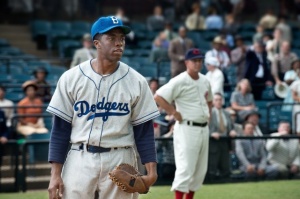 Drugs/Alcohol: A couple of scenes show adults drinking. Also some smoking, mainly cigars, which is accurate for the 1940s era.

Which Kids Will Like It? Kids 12 and older who like sports movies or movies based on true stories with historical significance.

Will Parents Like It? "42" is an inspiring movie and a great history lesson, and just in time for baseball season.

REVIEW: I love sports movies. Especially sports movies based on real people who changed our country for the better. You can't get more significant than Jackie Robinson, the first black baseball player recruited into Major League Baseball. Not only is the story riveting, but the film is really well done and had me hooked from the beginning to the end credits, which played over photos of the real Jackie Robinson and other real-life people from the movie.

In the aftermath of World War II, Brooklyn Dodgers' general manager Branch Rickey (Harrison Ford doing his best "gruff guy with a heart of gold") decides it's time to recruit the first black baseball player into Major League Baseball. Black players mean black fans, which means more cash. But beyond all of that, Rickey is a good guy with heartfelt motives. 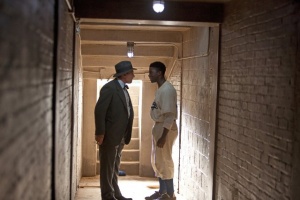 After sifting through stats on noteworthy black players, Rickey settles on Jack "Jackie" Robinson (Chadwick Boseman), a 26-year-old player for the Kansas City Monarchs. Rickey offers Robinson a spot on the Dodgers' minor league team the Montreal Royals, which leads to a contract with the Dodgers in 1947. The number on his uniform? 42.

Nothing about this situation is easy. Robinson faces racism from everyone -- fellow teammates, opposing team members, baseball fans, people on the street, everyone. During the first session of spring training in Florida, Rickey sets him up in a private home, rather than risk having him stay with the team. But Robinson still gets threatened, and later on, the entire team is turned away from a hotel because of him.

One particularly vile manager, Ben Chapman (Alan Tudyk) of the Phillies, hurls racial slurs and insults at Robinson, but Robinson manages to keep it together until he gets off the field, and then privately goes ballistic with a bat. With the loving support of his wife Rachel (Nicole Beharie, who looks like Kerry Washington's twin) and the steadfast faith and guidance from Rickey (a religious man who's always comparing Robinson's struggles to Jesus), he becomes a hero to both blacks and whites, and basically brings an entire country together. 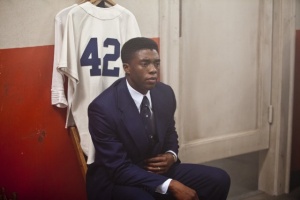 "42" is a near perfect film, riveting from start to finish. Whereas you look at Branch Rickey and go, ok that's Harrison Ford turning in a fine performance as the Dodgers' general manager, the lesser-known Chadwick Boseman doesn't have the lineage of "Star Wars" and "Indiana Jones," which is good, in this case. You really believe he's Jackie Robinson, not just an actor playing a part.

T.R. Knight (George on "Grey's Anatomy") turns in a scene-stealing performance as Rickey's right-hand man, and his "Grey's" castmate James Pickens, Jr. has a small role, as well. John C. McGinley is perfect as the calm and restrained announcer Red Barber, and Christopher Meloni plays Dodgers' manager Leo Durocher who's ousted after an adulterous affair.

Andre Holland plays Wendell Smith, a reporter whom Rickey hires to help shuttle Robinson around, and Max Gail (Detective "Wojo" on "Barney Miller") plays retired manager Burt Shotton who's called back into service after Durocher is suspended. Terrific cast all the way around, and the cars, clothing and other 1940s-era details are fabulous.

Even if you're not a sports-movie nut, "42" is an amazing, inspiring film that's also a great history lesson. Sure, we still have a ways to go on some things, but when you see a film like "42," it really drills home the fact that we've made some huge strides forward in the past 65 years. This is one movie you'll want to see on the big screen, and then get the DVD or blu-ray later for the awesome bonus features.

Sleepaway Camps 2021 In and Around New Jersey 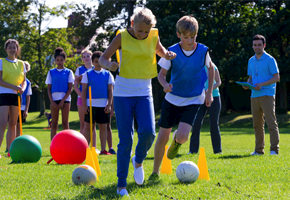 Day Camps 2021 In and Around New Jersey

Special Needs Camps 2021 In and Around New Jersey 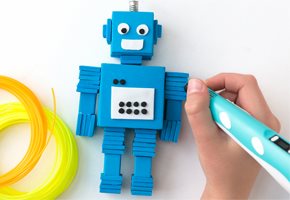 STEM and STEAM Camps 2021 In and Around New Jersey

For those who love Science, Technology, Engineering, Art, and Math STEM/STEAM Camps explore and…