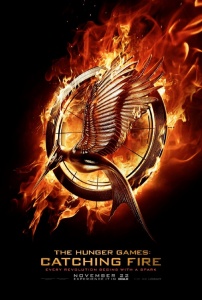 SYNOPSIS: This second movie in "The Hunger Games" franchise finds Katniss Everdeen and Peeta Mellark as targets of the Capitol after their victory in the 74th Hunger Games sparks a rebellion in the Districts of Panem.

MPAA Rating: PG-13 for intense sequences of violence and action, some frightening images, thematic elements, a suggestive situation and language

Sex/Nudity: Katniss kisses both Gale and Peeta a few times each; one scene with Peeta is particularly passionate. Johanna Mason strips naked in front of Haymitch, Katniss, and Peeta (though we only see her bare shoulders and their reactions). She also flirts with Peeta and asks, "What's it like to have everyone in the Capitol want to sleep with you?"

Violence/Gore: Lots of violence both during the games and outside of it. Government "Peacekeepers" viciously torture Gale, strike Katniss, and kill civilians throughout the Districts (most of the brutality happens off camera, though we do see Gale being whipped). A black market is ransacked and Katniss' friends and family are threatened. During the Games, the tributes are stabbed, poisoned, drowned and killed in various ways. After being exposed to a poisonous fog, Katniss, Finnick, and Peeta are covered in boils and chased by monkey "muttations." People in the districts riot and are killed by Peacekeepers. Cinna is dragged off (and it seems likely that he'll be killed) as Katniss enters the games.

Profanity: More language than the first movie, including "sh*t" and the bleeped out use of "f*ck" during Johanna's tirade on the Caesar Flickerman show.

Drugs/Alcohol: Haymitch drinks excessively and is often shown inebriated or with a drink in his hand. Katniss takes a swig of something after bad news. People drink at Capitol parties; someone offers Peeta a drink that will make him vomit so he can keep eating. District 6 Tributes are called "The Morphlings," because of their addiction to the narcotic painkiller.

Which Kids Will Like It? Kids 13 and older who liked the first "Hunger Games" movie, the books, or the main players - Jennifer Lawrence, Josh Hutcherson or Liam Hemsworth.

Will Parents Like It? The characters are entertaining, the acting top-notch, and the action intense. Yes, the story follows kids being forced to kill, but the focus is on the rebellion of the people to change things.

REVIEW: If you've read "The Hunger Games" books by Suzanne Collins, you know the story follows a group of kids thrown into a giant landscape arena with the goal of killing each other until there's one final victor.

That's awful, right? What could possibly be the appeal of such a story? I think the reason this story is so compelling is not because of the killing, but because of the rebellion that rises up in the second installment, "The Hunger Games: Catching Fire."

In this movie, we begin to see the people in the districts rise up, and Katniss Everdeen (Jennifer Lawrence) finds herself in the de facto leadership role in the rebellion. She doesn't want it. She didn't ask for it. But she's willing to see it to the end, to stop the psychotic madness they've all been forced to live under. THAT is why I think "The Hunger Games" is so compelling. If you're in a horrible situation not of your making, you can do something to make it better. There may be sacrifices. There may be times when things seem dire. But through it all, if people rise up and pull together, they can bring about change.

"The Hunger Games: Catching Fire" picks up shortly after the first movie ends. Katniss is dealing with post-traumatic stress as she struggles to find a new normal in District 12. Meanwhile, Peeta Mellark (Josh Hutcherson) is trying to reconcile the fact that Katniss was only pretending to be in love with him during the Games. She seems torn between Peeta and her friend and hunting partner Gale (Liam Hemsworth). They're both so handsome and noble - tough choice!

When menacing President Snow (Donald Sutherland) visits her home, he tells her she has to make everyone believe she and Peeta are in love in the upcoming Victory Tour of the Districts. Otherwise, her loved ones - including her mom (Paula Malcomson), sister Primrose (Willow Shields) and Gale - will be in danger.

Snow is threatened by Katniss' popularity among the starving and desperate masses, so he decides to make the 75th Annual Hunger Games a unique one: the 24 Tributes will be selected among the living victors. Katniss and Peeta once again find themselves in the Arena, making alliances with an eclectic group of former Hunger Games winners to stay alive.

Director Francis Lawrence masterfully takes the helm from Gary Ross and strikes a great balance between character development (Katniss realizes her potential to change things), the addition of new characters, the socio-political overtones, and the violence of the arena.

It's been a couple of years since I read the book, but the film seems staunchly faithful to the story. We see the growing friendship (and more) between Katniss and Peeta, and the gleeful way everyone else dives into their characters - Stanley Tucci as the creepily-smiling talk show host Caesar Flickerman, Lenny Kravitz as Katniss' faithful stylist Cinna, Elizabeth Banks as her flamboyant handler Effie Trinket, and Woody Harrelson as the "drunk with a heart of gold" Haymitch Abernathy.

And of course, much of the film's appeal rests on the strong shoulders of Oscar winner Jennifer Lawrence, who so effortlessly (or so it seems) slips into one of literature's most memorable female heroines, who's also a great role model for girls.

The soundtrack is moving and emotional, and includes tunes performed by Coldplay ("Atlas"), "Of Monsters and Men ("Silhouettes"), The Lumineers ("Gale Song") and Imagine Dragons ("Who We Are").

By Jane Boursaw.  Jane Boursaw is a family entertainment writer specializing in movies and TV. Visit her at  http://www.reellifewithjane.com or email jboursaw@charter.net.