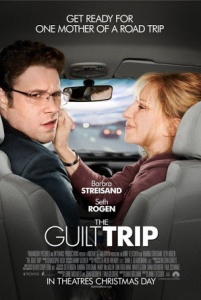 SYNOPSIS: Seth Rogen plays Andy Brewster, an inventor/chemist who's about to embark on a road trip to market his new cleaning solution to companies across the country. But a quick stop to see his mom Joyce (Barbra Streisand) turns into an unexpected cross-country voyage with her along for the ride.

MPAA Rating: PG-13 for language and some risque material

Which Kids Will Like It? Kids 13 and older who like Seth Rogen or Barbra Streisand, or movies involving a mother-son bonding storyline.

Will Parents Like It? Surprisingly, it's really a sweet story, and Streisand and Rogen have great chemistry as mom and son.

REVIEW: "The Guilt Trip' is not at all what I expected, and I mean that in the nicest way possible. When you've got a movie starring Seth Rogen, you sort of expect there to be plenty of raunchy scenes and off-color jokes. Remember, this is the guy from "Superbad" and "Pineapple Express."

But "The Guilt Trip" is more like his role in "50/50" than those other movies. We see a kinder, gentler side of Rogen. He's sweet and caring, in that kind of geeky way that makes me like him. And well, when you've got Barbra Streisand (who looks fantastic!) to class up a movie, that's a real bonus. 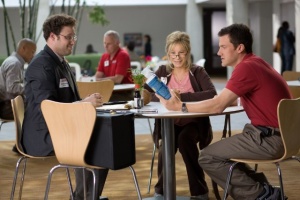 Maybe that's why I like "The Guilt Trip" more than I thought I would. Streisand and Rogen couldn't be more opposite, but they have great chemistry as a mom and son. They seem like they could actually BE a mom and son in real life.

In the movie, Rogen plays an inventor/chemist named Andy Brewster who's dumped his entire life savings into developing an all-natural cleanser he wants to distribute in big stories like Costco and K-Mart. The plan is to visit his Jewish mom Joyce (Streisand) in New Jersey, and then take a road trip across the country to pitch his product to various companies' headquarters. 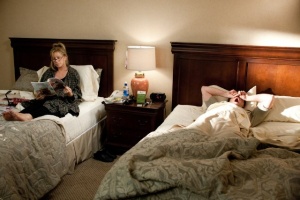 But while visiting his long-widowed mom, Andy learns that he's actually named after her first love. So he Googles the man's name and discovers that he lives in San Francisco. Andy then invites his mom to come along on the road trip, with the goal of surprising her by visiting her long-lost love in California.

Andy and Joyce have some great adventures while driving across the country. While continuing to be "mom" and "son," they also start to see each other as grownups. At a Texas steakhouse, Joyce scarfs down a four-pound cut of beef, just so she can dine free. In the car, she listens to the audiobook "Middlesex," the story of a girl who undergoes a gender change -- which makes Andy squirm. Joyce also helps Andy market his product in a way that's meaningful to the companies, and not just a bland pitch with lots of numbers and statistics. 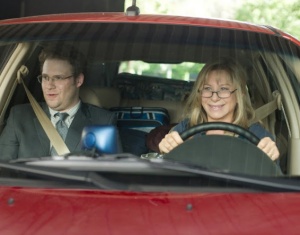 The behind the scenes stuff is interesting, too, so I expect they'll include some of that on the DVD and blu-ray releases. Streisand didn't want to travel too far from her beloved Malibu home, so all the filming took place within 45 minutes of her home.

If you like Rogen or Streisand, or sweet films about parents and their children connecting in a meaningful way as grownups, then "The Guilt Trip" is worth a look. And thankfully, the PG-13 rating is on-target, with very little questionable content. 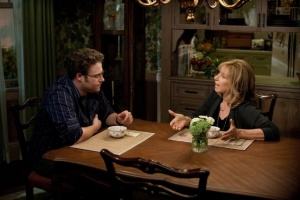 Sex/Nudity: Joyce flirts with a wealthy Texan, who asks if he can take her on a date back in New York City. Andy and Joyce discuss how she told him about sex, and also what his penis looked like when he was a baby. Joyce listens to the audiobook "Middlesex" in the car - about a girl who undergoes a gender change. Andy and Joyce stop by a strip bar where scantily-clad women are seen dancing in the background.

Violence/Gore: While defending drunk Joyce's honor, Andy punches a cowboy in the face and gets punched in return. Joyce warns Andy not to pick up any hitchhikers, because they "rape." 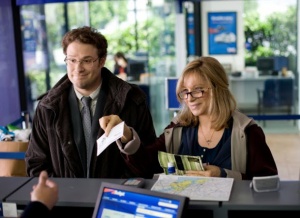 Drugs/Alcohol: Joyce drinks in Las Vegas, and gets drunk in Texas. Andy drinks as a coping mechanism after a frustrating week. 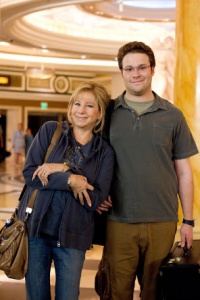