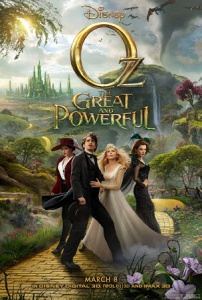 SYNOPSIS: James Franco plays a small-time magician who's swept away from dusty Kansas to an enchanted land where he's forced to decide whether he'll be a good man or a great one.

Sex/Nudity: Oz kisses four different women over the course of the movie; there are a few references to his various conquests. Theodora dresses provocatively in a corset-like top, tight leather pants and a jacket. Evanora shows some cleavage, too. 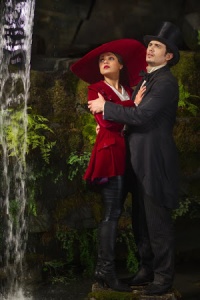 Violence/Gore: Flying, screeching baboons with big talons are scary. A circus strong man chases Oz and tries to beat him up. A twister scene is intense with sharp objects flying toward Oz through storm clouds. Glinda is tortured and chained up at one point. China Town is destroyed, along with most of its residents, and an orphaned, weeping China Girl is left with broken legs. The Wicked Witch of the West is scary (though not as scary as the original Wicked Witch in "The Wizard of Oz"). Oz navigates intense river rapids, gets hurled down a steep waterfall, is pursued by a hungry lion, and attacked by carnivorous plants. When Theodora gets angry, she hurls fireballs. The Dark Forest is rife with creepy eyes and a scary graveyard. In one scene it appears that a main character has died..

Profanity: "Damn" and "shut up" are used a few times.

Drugs/Alcohol: A clown drinks from a flask during Oz's magic show in Kansas.

Which Kids Will Like It? Kids 10 and older who like fantasy movies or "The Wizard of Oz."

Will Parents Like It? It's a fun prequel to the story we all know and love, although James Franco is a bit lackluster. I also have a problem with the fact that a woman transforms into an evil witch because of how Oz treats her.

REVIEW: When you're making a prequel to "The Wizard of Oz," that's a pretty big deal. You don't want to mess it up. As James Franco, who plays the wizard, said about the re-imagining, "I just wanted to be sure that, if they were going to touch this material, they had a good approach. But when I read the script, I saw that they were going to be respectful in the right ways. You get to see the familiar place, but the audience gets a completely new route through that place.” 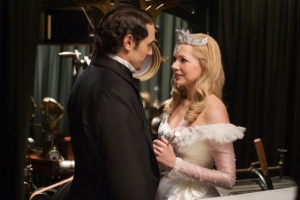 Like "The Wizard of Oz," this movie opens in the familiar black-and-white landscape of early 1900s Kansas. Oscar "Oz" Diggs (Franco) is a charismatic magician who charms a pretty country girl with an obviously fake story about his grandma's music box.

During his show, a young girl in a wheelchair (Joey King) asks Oz to make her walk. Unable to fulfill her request, he stops the show and sees a local girl Annie (Michelle Williams), who's come to tell him she's getting married. As she waits and hopes Oz will give her a reason not to get married, a circus strong man chases him for flirting with his girl.

Here's the part where everything changes for Oz. To escape the strong man, he hops into a hot air balloon, is whisked away from dusty Kansas, gets snarled up in a twister, and lands in the magical land of Oz, at which point he realizes he's not in Kansas anymore. 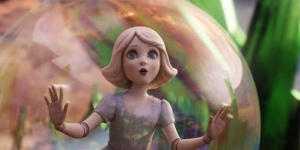 In colorful Oz, the magician meets beautiful Theodora (Mila Kunis), a young witch who explains that he must be the prophesied Wizard of Oz sent to deliver the kingdom from the evil witch. Theodora's older sister, Evanora (Rachel Weisz), promises Oz the throne and mountains of gold if he kills Glinda and destroys her wand.

But when Oz meets the gentle Glinda (Williams), it's clear that she is not the evil witch they described. With an adorable monkey named Finley (voiced by Zach Braff) and a brave little China Girl (King) by his side, Oz must decide whether he's just a con man magician or if he truly is the great Wizard of Oz.

Walt Disney Studios didn't take any chances with this prequel. They populated the cast with A-List stars, got Sam Raimi to direct and Danny Elfman to do the music, and threw a budget of $200 million at the stunning visuals and brilliant action sequences.

And for the most part, it works. One of my complaints is with the lead himself. I like James Franco as much as the next girl, but he tends to play the same devil-may-care rogue in a lot of his movies. I didn't really feel any emotional connection between him and the iconic Oz. 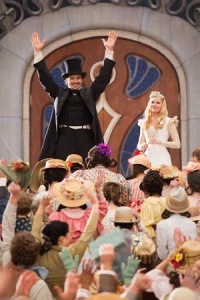 I also have a problem with the women in this movie. I'll try not to give away any spoilers here, but one particular woman in Oz immediately clings to the wizard when he crash-lands in his hot-air balloon. Oh, he's charming and charismatic with her at first, but when he rebuffs her, she goes ballistic and turns into, what else, an evil witch. Frankly, the fact that she would go nuts after a mild flirtation-gone-wrong doesn't exactly bode well for the female set, and it sends the wrong message to young girls.

Visually, the movie is stunning, with a gorgeous landscape of brightly colored flowers, butterflies, that iconic yellow brick road, the emerald city, and a cast of equally colorful characters. We also see lots of references to "The Wizard of Oz," including the sepia-toned Kansas that switches to color in Oz, Glinda traveling by bubble, multi-colored horses near the Emerald City, singing Munchkins, and the Wicked Witch's fireballs.

However, because Warner Bros. owns the rights to iconic elements of the 1939 MGM film, there were certain things that were noticeably absent, including any references to the ruby slippers worn by Judy Garland's Dorothy. Even the green of the Wicked Witch's skin had to be sufficiently different than Margaret Hamilton's witch in "The Wizard of Oz." You also won't see any mole on her chin. That's owned by Warner Bros.

Still, "Oz the Great and Powerful" is a nice way to keep this story going into future generations, and there's already a sequel in the works. Definitely worth checking out on the big screen -- in 3D, if you don't mind the glasses. And the PG rating is mostly on target, making it appropriate for kids aged 10 and older. 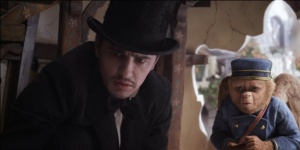 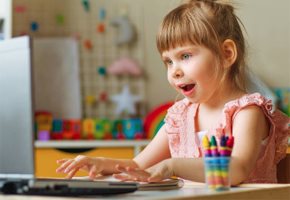