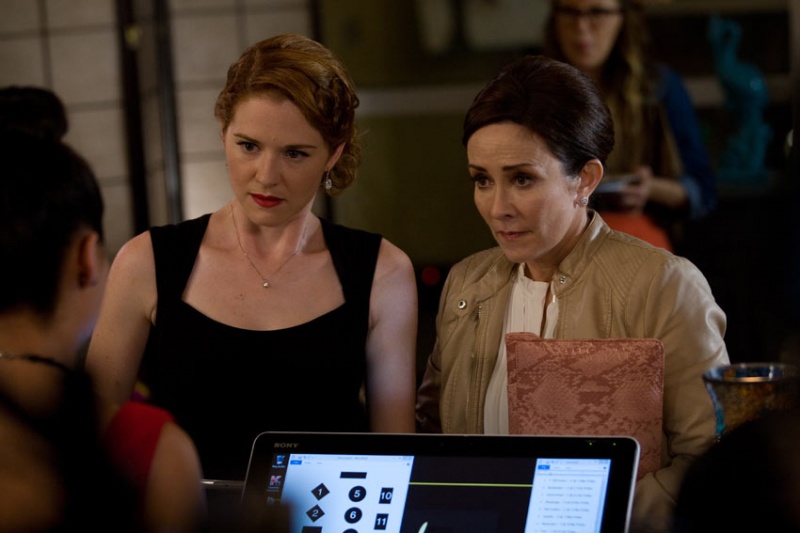 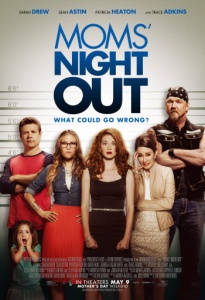 SYNOPSIS: All Allyson and her friends want is a peaceful, grown-up evening of dinner and fun – a much-needed mom’s night out. Instead, they get a wacky comedy of errors where people end up in jail, husbands go a little crazy, and a biker offers profound advice.

REVIEW: I love “Moms’ Night Out” so much, I could easily give it six out of five reels. I think because it’s so real. The moms in this movie aren’t Hollywoodized, size 0 moms with perfect hair and nannies. They’re the real deal, from being obsessed with an “eagle cam” to texting during book club to being completely frazzled just trying to get through the day (and night).

So many movies about parenthood are so far removed from reality, you just have no idea what world these people are living in. But “Moms’ Night Out” will make you feel good about your life, give you hope, and make you laugh out loud. I know – that’s a lot for a movie to deliver, but trust me, “Moms’ Night Out” delivers all of that and more.

The main character, Allyson, is played by Sarah Drew. You might not recognize her name, but you’ve likely seen her as Dr. April Kepner on “Grey’s Anatomy” or Kitty Romano on “Mad Men.” Allyson is a suburban stay-at-home mom who homeschools her three young kids. Her husband, Sean (Sean Astin) travels a lot for work, which means much of the parenting responsibilities fall to Allyson, who’s completely worn out.

When Sean comes home at the end of a very long and stressful Mother’s Day, Allyson decides to make next Saturday night a moms’ night out. She invites her best friend Izzy (Andrea Logan White), and the pastor’s wife Sondra (Patricia Heaton) out for an evening of fine dining. You know, a nice dress and high heels type evening. That means the dads will need to stay home with the kids.

Ok, let’s stop here for a second. This particular part of the story I can’t relate to at all, because my husband handles a lot of the house and parenting stuff that would ordinarily fall to “the mom,” while I gaze at this computer all day and try to come up with witty things to say about the latest movies and TV shows. I’m guessing that’s more and more the case these days — either both parents work outside the home and share parenting duties, or the mom has a full-time job while the dad takes care of the kids.

Back to the story, which culminates in a wacky mad-cap night out that involves a mixed-up reservation (to which Sarah goes a little postal), ditched cell phones (meaning the husbands can’t call for instructions), and even a missing baby (which is way less dramatic than it sounds).

Watching Sarah Drew in this movie makes me wish I’d kept up with “Grey’s Anatomy” the past few years. She’s amazing as a harried mom who wants to be a mommy blogger, and says things like, “Reading books is something I aspire to, but being a mom, I have no time. So being in a book club makes me feel like I read books.” Yes! I have no time to read books either! Nor do I have time to be in a book club, so she’s one step ahead of me there.

I also love that Sarah says she’s “stress-paralyzed” (something I suffer from every day), and comes up with the ingenious idea to put a frame around the pictures her kid draws on the walls (why didn’t I think of that?).

The rest of the cast is perfect, including Sean Astin as Sarah’s loving husband, Patricia Heaton as the pastor’s wife (who has one of the best lines of the movie: “This is God punishing me for the Woodstock reunion”), and Trace Adkins as a biker with a heart of gold who loves Pinterest. He also has one of the most profound lines of the movie, as he tells Sarah, “Whatever you are is enough. Y’all spend so much time beating yourself up, it must be exhausting.” Yep.

There is a faith-based message to the movie, as the biker continues on to say that God will take care of the rest. It’s not a heavy-handed message, but it’s there.

“Moms’ Night Out” is laugh out loud funny (everyone in the theater not only laughed along with me, but also clapped at the end), and gets my pick as Best Movie of 2014 so far. Any upcoming contenders have their work cut out for them.

Sex/Nudity: A few marital kisses. A woman discovers she’s pregnant. A mom nixes the idea of her teenage daughter wearing skimpy clothes on a date.

Violence/Gore: A cop accidentally tasers a woman. A man punches another man in the nose and is later head-butted by a different man. A dad and his son are both injured (but not seriously) and taken to the hospital. A man slams his own dislocated shoulder against a wall to snap it back into place (don’t try this at home). Several characters end up in jail. There’s some reckless driving with kids in the car. A man is hit with pepper spray in the eyes.

Profanity: Insults include “tramp,” “pathetic,” and “leech on society.”

Drugs/Alcohol: At a bowling alley, a waitress carries a try of beer bottles. A pastor’s wife says she can’t be seen with alcohol (and accidentally ends up in the spotlight carrying bottles). A couple of characters appear drunk or stoned. A recovering alcoholic (who’s never seen) is said to have left in search for a drink, so characters set off to look for her. Adults are seen with wine glasses on their tables at a restaurant.

Which Kids Will Like It? It’s really more for adults than kids, but kids 13 and older might get a laugh out of it.

Will Parents Like It? “Moms’ Night Out” is the Best Movie of the Year so far. I also love that it’s rated PG, so there’s nothing too raunchy. Do yourself a favor and go see it. Preferably with some other parents.