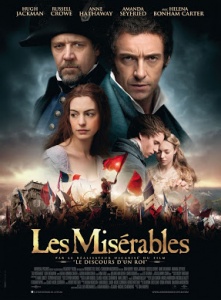 SYNOPSIS: It's 19th-century France, and Jean Valjean, who for decades has been hunted by the ruthless policeman Javert after he breaks parole, agrees to care for factory worker Fantine's daughter, Cosette. The fateful decision changes their lives forever.

Which Kids Will Like It? Kids 14 and older who love the Broadway musical, or musical films about history. Note that nearly the entire movie is sung, so unless kids love music, they might be bored watching Les Miserables.

Will Parents Like It? While the singing doesn't measure up to some of the previous stage productions or anniversary concerts, the story is timeless.

REVIEW: I must preface this review by saying that I've never seen any of the stage productions of Les Misѐrables nor read the classic novel by Victor Hugo on which the story is based (I know - a travesty, right?). So this review might get me booted off the Internet because I have no connection to any of the previous versions of the story.

Honestly, I was a little bored with the movie. That may be because I saw it at the end of a long Christmas Day and was tired to begin with. Or it might be because there's only a handful of spoken lines, and the rest is all singing. And now that I've watched clips from some of the stage productions, as well as the 25th Anniversary Concert, it's safe to say the vocals in the film don't come close to the vocals in those previous versions, with the possible exception of Samantha Barks, who played the role of Eponine in the West End production and 25th Anniversary Concert, winning the film role over Taylor Swift and other big-name stars. She's definitely a highlight of the movie for me. 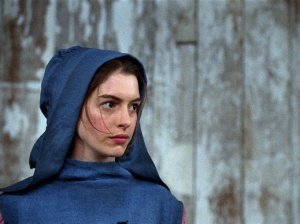 Set in the gritty landscape of 1800s France, the story centers on Jean Valjean (Hugh Jackman), a fugitive who's wanted for breaking parole after serving 19 years for stealing a loaf of bread and then trying to escape. The brutal Inspector Javert (Russell Crowe) is relentless in his pursuit of Valjean, even though it's been years since he left prison.

Meanwhile, Valjean has dedicated himself to helping others, and finds himself caring for Cosette (Isabelle Allen as a child; Amanda Seyfried as an adult), the daughter of doomed factory worker Fantine (Anne Hathaway), who loses her job and turns to prostitution to help support Cosette, who's been in the care of greedy innkeepers Thenardier (Sacha Baron Cohen) and Madame Thenardier (Helena Bonham Carter). 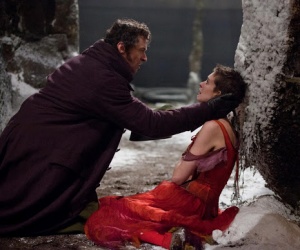 After Fantine's death, Valjean and Cosette live in secrecy, but are soon caught up in the June Rebellion of 1832 in Paris. With Javert hot on his trail again, Valjean must decide whether to continue running or take a stand. Meanwhile, Cosette has fallen for Marius (Eddie Redmayne), a young revolutionary who organizes the citizens to fight. Blinded by his love for Cosette, Marius doesn't realize that Eponine has fallen for him.

Les Misѐrables is doing really well in the awards department this season, scoring nominations from the Screen Actors Guild, Golden Globes, and many others. It's already won Movie of the Year from the American Film Institute and Best Acting by an Ensemble from the National Board of Review. Suffice to say, it's a shoo-in for multiple Oscar nominations, to be announced Jan. 10, 2013. 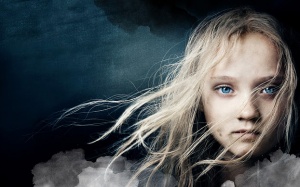 Even though I wouldn't have minded a few more spoken lines mixed in with the songs, I can't deny that  Les Misѐrables is an epic, majestic film adaptation, blending equal parts politics, poverty, class struggles, faith, forgiveness and redemption. It's truly a timeless story that's just as relevant today as when Victor Hugo's book was published in 1862.

As mentioned, Samantha Barks gets my votes for best vocals, with Eddie Redmayne a close second. Hugh Jackman, Anne Hathaway and Amanda Seyfried turn in great performances with respectable vocals, and Bonham Carter and Cohen are a nice comedic break in the drama. 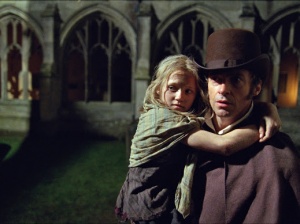 Director Tom Hooper had the actors sing live as the cameras rolled, which wonderfully captures the emotions of the characters in the moment. Hathaway's heartbreaking version of "I Dreamed a Dream" is a nice centerpiece to the film, especially if the only version you've ever heard is Susan Boyle's on Britain's Got Talent in 2009 (which was also amazing, by the way). However, after hearing some of the majestic vocals of the previous men who've played Javert, Crowe's vocals don't even come close, though I do give him a LOT of credit for trying.

Les Misѐrables on the big screen should not be missed, especially if seeing the live stage production isn't an option. While the constant stream of songs from start to finish might be a little heavy if you're not an avid fan of musicals, you don't need to be familiar with the story to find something to love about it. 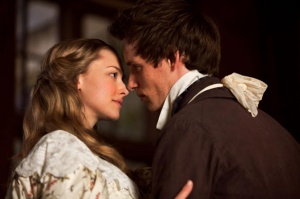 Genre: Drama, Musical, Romance, Based on a Book 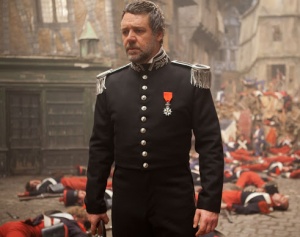 Violence/Gore: Much of the second half of the film is centered on the June Rebellion, a Paris uprising in 1832, and battle scenes include explosions, cannons, hand-to-hand combat, beatings, and  gunfights, with a high body count, including some children. Not much blood overall, though one scene shows blood running down a cobblestone road. A major character leaps from a bridge to his death. A woman becomes a prostitute to support her child, who's treated badly by the innkeepers who are raising her. 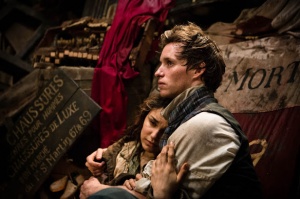