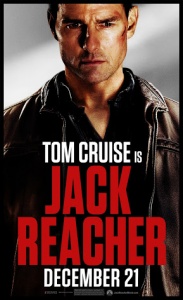 SYNOPSIS: Based on the book “One Shot” by Lee Child, this action thriller stars Tom Cruise as Jack Reacher, a highly trained (and usually invisible) former military cop who’s called in to help on a murder case where five random people are shot by a trained sniper.

Which Kids Will Like It? Kids 14 and older who like Tom Cruise movies or crime thrillers with lots of action.

Will Parents Like It? Jack Reacher is kind of a typical Tom Cruise movie (because he plays pretty much the same character in every movie), but it’s extremely violent with lots of guns and shooting.

MPAA Rating: PG-13 for violence, language and some drug material

REVIEW: When I heard that the New York and Pittsburgh premieres of Jack Reacher were canceled out of respect for the Sandy Hook Elementary School shooting in Newtown, Connecticut, that seemed like an admirable thing to do. The premieres were scheduled to take place just days after the terrible shooting, and any sort of glittery events seemed trivial in comparison. Even the L.A. premiere of the non-violent Parental Guidance was canceled.

What I didn’t realize – having never read the book by Lee Child – is that Jack Reacher is nonstop gun violence from start to finish, including assault weapons. And some of the violence involves kids in a secondary way. Talk about unfortunate timing on this particular movie’s release date. Or maybe the timing is good, because it gets us talking about whether we need 1) these kinds of movies, and 2) better gun control in our nation.

But even if the release date hadn’t been in the wake of the Newtown shooting, it’s still a very violent movie. I’m not sure how it snuck under a PG-13 rating, because the violence definitely edges toward an R rating. 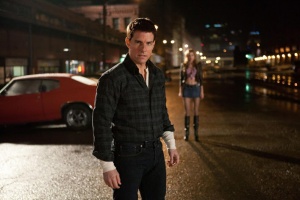 The movie begins with a lone gunman shooting and killing five seemingly random people on the street. From his hospital bed, the shooter makes one request: “Get Jack Reacher.” We learn that Reacher (Tom Cruise) is a former military cop and weapons expert skilled in martial arts. He lives off the grid – no cell phone, no home, and no known address, although his military retirement checks are wired to a bank account.

Reacher, the title character in a series of Lee Child novels – travels from town to town and always gets involved in some kind of adventure. He claims he’s no hero, but clearly, he is. One note on the gun violence is that he seems to want to resolve things peaceably. It’s the other people who engage him in violence, not the other way around.

Working with defense attorney Helen Rodin (Rosamund Pike), Reacher sets out to make sure the accused suspect gets what he deserves. But during the investigation, he begins to suspect that the hospitalized shooter may, in fact, be innocent, and there may be a larger conspiracy at play here.

I’ve always been a fan of Tom Cruise, despite the fact that he plays pretty much the same character in every movie. That’s part of the appeal, in my view. You’re usually not in for any big surprises there. You know what you’re getting. 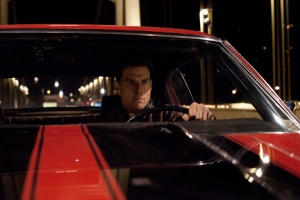 And while the story of Jack Reacher is filled with plenty of action and peril and plot twists, the pacing seems a little off. The action sequences move along pretty well, but the pace grinds to a halt as Cruise and Pike (who has that deer-in-the-headlights look down pat) try to piece together the clues. The villains are evil enough, but their motivations seem unclear, and the conspiracy plot – and well, everything else – is secondary to the skilled and confident hero that is Tom Cruise. Even if you’re a Tom Cruise fan like me, his presence is not enough to make a movie great.

Neither is the presence of documentary filmmaker Werner Herzog, who plays one of the villains. I’m still scratching my head as to how he and his Arnold Schwarzenegger-sounding voice ended up in this movie.

And then there’s the violence. As mentioned, it’s nonstop guns and hand-to-hand combat throughout the movie. One of the murder victims at the beginning is a nanny running with a child. I know that a scene was edited out of this movie at the last minute, and I’m wondering if it had something to do with that child. I can guarantee that everyone who watches that scene will be thinking about those Sandy Hook kindergartners and teachers who lost their lives that awful day.

Robert Duvall plays an aging gun store owner named Cash who ends up helping Reacher take down the bad guys, while referencing the fact that his clientele don’t like people messing with their constitutional rights. Cash says he doesn’t relish the thought of killing strangers, but his actions speak differently, He does, in fact, seem to relish taking them out from a distance while Reacher goes in for the kill close range (despite the fact that Duvall only lets him have a knife to work with). 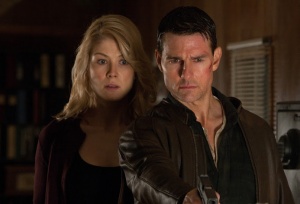 With a different release date, Jack Reacher might have been a better-received movie. It has all the elements of a good – not great – action thriller. But this close to the Sandy Hook school shooting, it’s just a reminder that we need to examine our nation’s gun policies and think carefully how to move forward.

Genre: Action, Crime, Thriller, Based on a Book 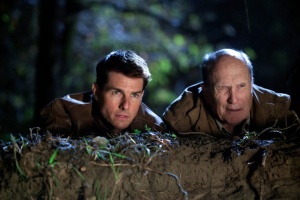 Violence/Gore: Gun violence throughout the movie, including the beginning scene where a lone gunman shoots five seemingly random people on the street. Reacher, a former military cop trained in weapons and combat, takes on a group of guys in a street brawl, leaving them bloody with broken bones. Other scenes include execution-style killings (both close and long range), references to torture, and guys beating up women. A woman is taken hostage by thugs. An aging gun store owner is called upon to help Jack by killing thugs from a distance. A high-speed chase scene involves lots of cars damaged on the streets.

Drugs/Alcohol: One bar scene shows lots of people drinking. A secondary character is known to cook meth, and we see drug paraphernalia at a house. Reacher shares a beer with Helen in a motel room.