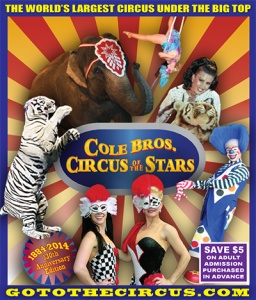 Cole Bros. Circus Is Returning To:

W. W. Cole, who inaugurated the Cole Bros. Circus title in 1884, amassed fortune and fame by briuging the most astounding marvels of the day to villages and towns across the American continent. Among the amazing attractions promoted by W. W. Cole, incandescent light - a single, glowing glass globe, powered by a steam engine - drew record crowds, with young and old alike filling Cole's tent to witness the seemingly impossible invention. The brightly lit tent of Cole Bros. Circus of the Stars bears slight resemblance to W.W. Cole's 19th century Big Top, but the tradition of watching what appears unbelievable happen right before your eyes remains at Cole Bros. Circus.

The 2014 Edition of Cole Bros. Circus celebrates 130 years of circus history with a special show reprising legendary circus acts of the past along with featuring the talents of cirque nouveau artists. In Mexico's Angels in the Air performance, daring young men and women on the flying trapeze soar high above the hippodrome track. Circus daredevils cast caution aside in ThunderDrome, with the zany Cole Bros. Clown Crew arriving in the nick of time to provide comic relief. Elephants and acrobats, tigers and teeterboard artists take their turns in the spotlight, and The Human Cannonball gets fired at every show! 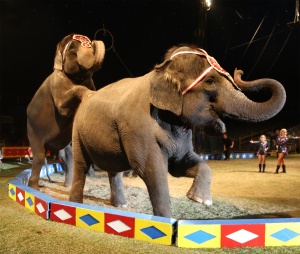 With a dynamic new show to commemorate its anniversary, Cole Bros. Circus proves its enduring appeal. W. W. Cole introduced the public to the latest scientific achievement.  Today, Cole Bros. Circus affords welcome opportunity to take a break from technology and enioy the simple pleasure of attendinl! the circus.