If you ask me, the perfect trip combines city sightseeing with outdoor exploration.  We found this with our summer trip to Seattle, Victoria, BC and the Olympic National Park.  Even if you can’t spare the full 10 days, portions of this trip can be split up and done as a stand-alone vacation.  The Pacific Northwest is definitely a great family destination. 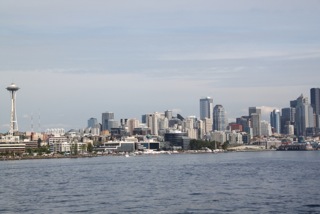 Day One - After a morning flight from Newark, we arrived in Seattle just around noon.  We dropped our luggage at the hotel and headed directly to Pike Place Market.  Established in 1907, it sells just about anything fresh there – flowers, fruits, vegetables, meats and fish – and yes, it is true, they do throw the fish. We picked up a couple of snacks and tried a few straws of local honey, then high-tailed our way down to the harbor, where we had reservations on the Argosy One Hour Harbor Tour.   Although – I’m not much of a tour person, it was a great way to get a quick overview of the city, learn about the history of Seattle and see a few of the famous skyscrapers and landmarks. Afterwards we grabbed dinner at one of the many fish restaurants dotting the harbor.

Day Two – Time to hit some of the major sites – first we took the elevated train (very easy to navigate) to the Space Needle and took the 43 second elevator ride up to the observation deck, 520 feet above ground level.  The view was phenomenal – you have a 360-degree panoramic view of the city and the harbor, and, in the distance, Mount Rainer.  An intereactive computer screen helped us locate certain landmarks, plus explained the history behind the Needle.

Then we headed next door to the Pacific Science Center – the outdoor hands-on water exhibit and Butterfly house were definite highlights. Afterwards, we trekked to the Klondike Gold Museum – make sure to pick up a Kids Passport at the info desk and let the kids earn stamps at different stations in the museum.  It was a great museum – the kids loved learning about the gold mining industry and how difficult it was.

Day Three - Next up was the Museum of Flight (tons of airplanes and a chance, of course, to learn about local business, Boeing), then afterwards we headed to the Crittenden Locks, where we relaxed and watched as a line of pleasure boats settled one by one into the locks, where the water level was raised then lowered to help them pass through.  (Even now, I’m not sure I understand the science behind it, but the locks connect the Puget Sound and Lake Union and Lake Washington and since the water levels are not the same, they need to even things out with this lock system).  There is also a salmon ladder there (we got to see the fish swimming upstream), plus a very beautiful garden. 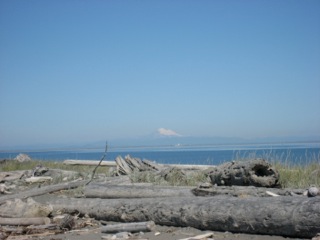 Day Four – Time to leave Seattle and drive towards Olympic National Park. It’s only about a 2 ½ hour drive to Sequim where we had rented a house on a lavender farm (yes, we rented a house on a real working Lavender Farm!) but we took our time and stopped along the way at scenic overlooks and at Hood Canal for a picnic.  The scenery is gorgeous!

Day Five and Six - Headed out bright and early for Olympic National Park.   The park is an amazing ecological wonder – there are four distinct ecosystems: rainforest, coast line, alpine and forests.  I was most fascinated by the rain forests and the huge draping moss, but the kids loved the beach area the most as there were miles of fallen, smooth, silvery white tree trucks that they could walk and jump on.  We were lucky enough to catch sight of two whales off the coast and we enjoyed several hikes. Later on the second day, I convinced the crew to leave the park bit early and drive through Forks – the infamous town of Twilight.  I admit I am a fan of the books, but in truth, the town really wasn’t that impressive, even a bit depressing. 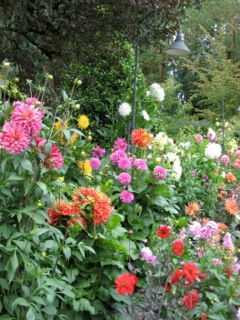 Day Seven - The next morning we caught the ferry to Victoria Island, British Columbia (don’t forget you need a passport!). I thought it would be a fun boat ride, but after the initial excitement of driving onboard and parking our car below deck, I was the only one who stayed outside enjoying the ride past the towering evergreens and out onto the Strait of Juan de Fuca. I spent the 90 minutes looking for whales and dolphins, but still hadn’t spotted one when the whistle blew and we returned to our car. After disembarking and going through customs (where we had to hand over our apples because no fresh fruit was allowed from the mainland), we headed to world famous Butchart Gardens.  This is truly a remarkable garden – the rose garden itself was spectacular – but even if you think your family won’t appreciate the beauty or landscape, it’s a nice walk and there’s a small café and a carousel.

Later, after dinner, we went to the Miniature World. Sure it’s a tourist trap, but I’ve got to tell you, it was really fun.  There are over sixty miniature dioramas, depicting important events in history, stories and other fictional settings, and we all marveled over the tiny landscapes, buildings and scenes.

Day Eight - Next up: The Royal BC Museum – we especially enjoyed the Native Americans exhibit with a grand display of totem poles. Afterwards, we headed across the street to the Pacific Underseas Garden - my advice, skip it.  It’s expensive and nothing really more than a small, dark aquarium in a ship-shaped building.  The exhibits aren’t that interesting.

Day Nine - We headed back to Seattle that morning – taking the ferry to Vancouver and passing over the Canadian/USA border – a long line but fun to actually “drive” over the border.  Then we continued on to Seattle.  This is a tedious drive and there’s really nothing scenic about it, but it’s the only way to get back to the city.

Day Ten – On our last day, we decided to head to Mt Rainer. Summiting at over 14,000 feet, Mt. Rainer is the largest peak in Washington and offers beautiful vistas and a chance to get out for one last hike. It turned out it was a bit farther from Seattle than we realized – about 2 hours – but it is well worth the drive. The scenery is breathtaking. One word of advice – dress warmly and in layers.  The air is pretty darn cold up at the higher altitudes – the thermometer outside of the visitors center hovered at 40 degrees and it was the end of August. We were not dressed properly and froze as we hiked up in a field of hardy wildflowers.  We picnicked inside to warm up, then headed out to brave the weather and take one final hike.  By late afternoon we were all exhausted and ready to go home.