Bound by a shared destiny, a teen bursting with scientific curiosity and a former boy-genius inventor embark on a mission to unearth the secrets of a place somewhere in time and space that exists in their collective memory. 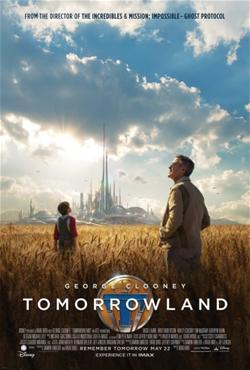 SYNOPSIS: Bound by a shared destiny, a teen bursting with scientific curiosity and a former boy-genius inventor embark on a mission to unearth the secrets of a place somewhere in time and space that exists in their collective memory.

REVIEW: Back when I was a kid growing up in the 1960s, I loved watching “Walt Disney’s Wonderful World of Color” every Sunday night. The show aired from 1954 to 1992, and our whole family used to watch it together (this was back when “family shows” actually existed).

The show featured the usual array of Disney characters like Mickey Mouse, Donald Duck, Davy Crockett, The Swamp Fox, and Charlie the Lonesome Cougar, as well as some blatant marketing for Walt’s new theme park, Disneyland. I think we can all agree that Walt pioneered the concept of “product placement.”

The episode that aired on May 17, 1964, “Disneyland Goes to the World’s Fair,” featured, among other things, the Carousel Theatre of Progress, including a primer on audio-animatronics and a performance of the song “There’s a Great Big Beautiful Tomorrow.”

Fast-forward to the episode that aired on Jan. 21, 1968, which featured the latest attractions at Disneyland, including Pirates of the Caribbean in New Orleans Square and Tomorrowland, with such features as the People Mover, Adventure Thru Inner Space, and the Carousel of Progress. It was all new and fresh, and everyone was hopeful about this bright future ahead of us. There might even be jetpacks!

Jump ahead 47 years to this weekend, and “Tomorrowland” hits the big screen as a feature movie starring George Clooney and Britt Robertson. Let’s be clear, it’s not one of the best Disney movies you’ll ever see, but what I love about “Tomorrowland” is that it takes us back to that time in the 1960s when people dreamed big and anything seemed possible.

Sure, people still dream big and as we’ve learned over the past four or five decades, anything really IS possible. You can actually carry a phone with you and SEE the person you’re talking to. That’s straight out of The Jetsons, right?

But somewhere along the way, we’ve gotten obsessed with dystopian, apocalyptic books, movies, TV shows and videogames centered on barren wastelands ruled by the “kill or be killed” philosophy. How did that happen? When did we get so cynical? Do we know too much? Or have we just forgotten how to be positive about the future?

So, while again, “Tomorrowland” isn’t a slamdunk of a movie, I appreciate where they’re going with it. It reminds us that dreamers still exist, that our future can be bright, and that things we can only imagine right now might one day be a reality.

The story begins with a curmudgeonly Frank Walker (George Clooney) talking about how the future was different when he was a kid. A flashback takes us to that 1964 New York World’s Fair (yes, the same one mentioned in the above episode of “Walt Disney’s Wonderful World of Color”), where a young Frank (Thomas Robinson) hops off a bus and heads for the inventors competition.

The head judge (Hugh Laurie) isn’t impressed with Frank’s jetpack (which Frank admits doesn’t really work all that well), but a mysterious young girl named Athena (Raffey Cassidy) likes Frank’s enthusiasm and gives him a magical “T” pin that unlocks the gateway to a futuristic world called, you guessed it, Tomorrowland.

Flash forward to the present day. Casey Newton (Britt Robertson) is the brilliant, optimistic daughter of a soon-to-be-unemployed NASA engineer (Tim McGraw). One night after Casey rides her bike home from yet another caper involving her efforts to keep NASA from disassembling a platform, we see Athena (who looks surprisingly the same as she did 50 years ago) secretly leaving Casey one of those “T” pins that she gave Frank so long ago.

When Casey finds the pin and touches it, she’s instantly transported to a bright and shiny alternate dimension. Soon, with Athena’s help, Casey travels across the country to meet Frank. After a bumpy start, Frank and Casey realize they must find their way back to Tomorrowland so they can save the Earth’s future.

I love everything about this movie except, well, the plot. It’s convoluted and meandering, and as my daughter said about half-way through, “when is something going to happen?” I wondered the same thing. Much of the movie takes place in “our” world, so we only get to see glimpses of “Tomorrowland” (and it would have been spectacular, based on the visuals and special effects we DID get to see).

There’s also the heavy-handed message that humans are destroying our planet. As my daughter said, “I feel like I’ve been hit over the head” with images of melting icebergs and nuclear bombs and war zones. Yes, we know we’re messing things up. But we hope that the dreamers among us can fix it.

So despite the high expectations, the stellar cast (Clooney and Robertson’s banter is fabulous), and Brad Bird’s impressive background (he helmed “The Incredibles” and “The Iron Giant,” after all), “Tomorrowland” fails to reach its hype as one of the best family movies of 2015. I’m on the fence about whether you should shell out cash to see it on the big screen. I think yes, it’s worth seeing in theaters. Plus, you get to hear that iconic Sherman Brothers’ song, “There’s a Great Big Beautiful Tomorrow,” which premiered on that 1964 episode of “Walt Disney’s Wonderful World of Color.”

And let’s hold onto those positive messages: Ideas are worth fighting for, inventors should keep inventing and never give up, and dreamers should keep dreaming.

Sex/Nudity: A few longing looks between young Frank and Athena.

Violence/Gore: Frequent peril includes explosions, chases, crashes and hand-to-hand combat. The body count is high. Robot soldiers shoot at and kill several people (the guns disintegrate them). In one scene, it appears that a major character has died. Footage of war, storms, nuclear bombs and other devastation.

Will Grownups Like It? “Tomorrowland” might have grownups longing for their own childhood dreams of jetpacks and spaceships. Overall, however, the movie doesn’t live up to its expectations.