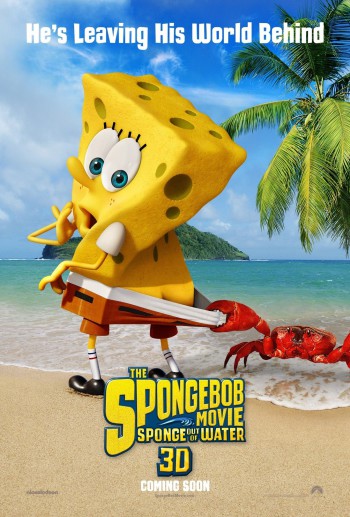 SYNOPSIS: When a diabolical pirate steals the secret Krabby Patty formula, SpongeBob and his friends must travel to the surface in order to get it back.
Reel Rating: 3.5 out of 5 Reels

Official Site: The SpongeBob Movie: Sponge Out of Water

REVIEW: If you’re in need of some goofy fun, go see “The SpongeBob Movie: Sponge Out of Water.” It’s great for kids aged six and older, emphasizes teamwork and friendship. The movie will especially appeal to fans of the “SpongeBob” TV show and previous movie (it’s like visiting old friends), but even those unfamiliar with the characters or show will find something to love.

The story begins with a pirate (Antonio Banderas) finding a buried storybook and scroll under the sea. Back on his ship, he tells a flock of seagulls the story of the most beloved treasure in Bikini Bottom — the Krabby Patty made by SpongeBob SquarePants (Tom Kenny).

Back under the sea in Bikini Bottom, Plankton (Doug Lawrence, though he goes by “Mr. Lawrence” on IMDB.com) is trying to steal the Krusty Krab’s top-secret Krabby Patty recipe. SpongeBob stops him, but when the real recipe disappears into thin air, even the world’s best Fry Cook (that would be SpongeBob) can’t reproduce it from memory, and mass chaos erupts in Bikini Bottom! Because it’s all about the Krabby Patty!

As Bikini Bottom residents deal with the trauma of life without Krabby Patties, SpongeBob and his friends Patrick (Bill Fagerbakke), Squidward (Rodger Bumpass), Sandy (Carolyn Lawrence), and Mr. Krabs (Clancy Brown) head to the surface to track down their missing recipe — which is now in the hands of the vengeful pirate.

If you’re familiar with the TV show or previous movie, you know the trippy nature of the underwater gang and their problems. I love the goofy antics and storylines that could go anywhere, but as mentioned, I think this movie is fun for both longtime fans and people not familiar with the show or characters.

I love the first part of this movie, where the gang is animated and underwater, better than the second part, where they’re in “our world” — that’s the “sponge out of water” part where the gang acquires superpowers and heads to the beach. But it’s all good fun, and they always throw in little references for grownups, like the song from “The Good, The Bad and the Ugly” in one scene.

As the movie’s villain, Banderas is entertaining, but the banter between SpongeBob and his longtime nemesis Plankton is what it’s all about. Kids and grownups looking forward to seeing their favorite supporting characters like Mrs. Puff, Pearl, Larry the Lobster and Gary should know they’re relegated to brief cameos (although Larry is completely absent).

Things do get a little dicey when Bikini Bottom spirals into a post-apocalyptic state after the Krabby Patty recipe is stolen. Also, SpongeBob is nearly sacrificed to “the sandwich gods,” but of course, all turns out well in the end.

Sex/Nudity: A bit of innuendo here and there, but nothing too iffy. One of the gang accidentally lands on a sunbathing woman’s back and she murmurs that it feels good.

Violence/Gore: Post-apocalyptic Bikini Bottom residents nearly sacrifice SpongeBob, but are stopped before anything awful happens. An ancient dolphin shoots lasers from its blowhole. The “superhero” characters fight the swashbuckling pirate chef. Weapons are used, including guns and cannons, but much of the violence is exaggerated for comedy.

Which Kids Will Like It? Kids 6 and older who like the SpongeBob TV show or previous movie.

Will Grownups Like It? It’s fun and goofy.  Teamwork and friendship are the focus for kids.