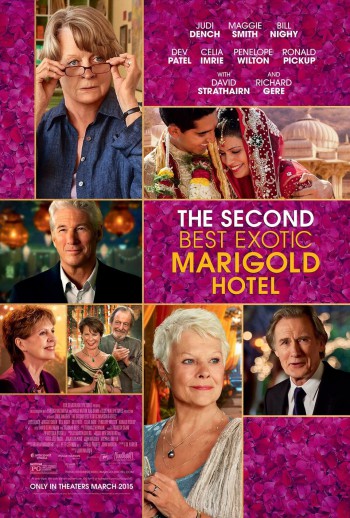 SYNOPSIS: The Best Exotic Marigold Hotel has only one remaining vacancy, posing a rooming predicament for two fresh arrivals, so Sonny and Muriel travel to the U.S. in search of investors for a second hotel.

SYNOPSIS: The Best Exotic Marigold Hotel has only one remaining vacancy, posing a rooming predicament for two fresh arrivals, so Sonny and Muriel travel to the U.S. in search of investors for a second hotel.

REVIEW: You know you’re in for a fun ride when a movie opens with Dev Patel and Dame Maggie Smith careening down Route 66 in a sports car with George Thorogood’s “Move It On Over” playing in the background. This sequel to 2012’s smash hit “The Best Exotic Marigold Hotel” is just as fun as the first movie. How could it not be, with such a wealth of pensioners sharing screen time?

Muriel Donnelly (Smith) and Sonny Kapoor (Patel) are in the States seeking investors for a second Best Exotic Marigold Hotel, as the first one is overflowing. The residents from the first movie are now settled into the all-inclusive Indian hotel specializing in “the elderly and beautiful,” and all are present and accounted for during their morning roll call (because you never know if one of them may have expired during the night).

The American investors, including Ty Burley (David Strathairn), are intrigued with  Sonny’s plan, but inform him that they’ll be sending an anonymous guest to check things out. When Muriel and Sonny arrive back home in colorful India, sure enough, the handsome 60-something Guy Chambers (Richard Gere) shows up, but tells them he’s an aspiring author working on a book. Of course, Sonny believes him to the undercover investigator and goes to extremes to make sure he’s comfortable.

In romantic escapades, Sonny and Sunaina (Tina Desai) are engaged and planning a wedding (not without problems, of course), Madge (Celia Imrie) must decide between two suitors, Evelyn (Judi Dench) and Douglas (Bill Nighy) are struggling to take the next step in their relationship, and Carol (Diana Hardcastle) and Norman (Ronald Pickup) ponder their “open” union.

Hollywood has traditionally been a place for all things “young,” so I love movies like “Marigold Hotel” that celebrate the wisdom and beauty of people who aren’t basking in the glow of their youthful appearance. And guess what? The oldsters are just like the rest of earth’s citizens. They’re unsure of themselves, shy in their romantic endeavors, and uncertain of their place in the workforce.

They’re also happy, sad, lonely, social and every other adjective used to describe humans of any age. It’s not like you get to a certain age and suddenly, you’re not human anymore.

There’s a great scene where Judi Dench’s character Evelyn is talking with someone she’s been working for, buying fabrics and negotiating prices with the street vendors. Evelyn assumes that the company will want someone younger, and instead, they want her to work for them full-time — and there will be lots of travel. “I’m 79 years old,” says a shocked Evelyn. “We don’t mind if you don’t,” says her potential employer.

And when Muriel asks Evelyn, “How many new lives can we have?,” her friend replies, “As many as we like.” That’s a very comforting thought when so many seniors see their independence and value in this world taken away from them. Could age really be a state of mind? Ok, maybe not 100 percent — these bodies aren’t made to last forever, after all — but a positive outlook sure can’t hurt.

I hope there’s a third “Marigold Hotel” in the works, even though as Nighy told my writer Paula Schwartz on the red carpet at the NYC premiere last week (featuring Dench and her new beau!), “We don’t know, but as Judi said when the second one was announced, ‘They better hurry up.’ So I don’t know if there’s ever going to be a third one, but if I’m still alive, yeah, I’ll be there.”

Sex/Nudity: Discussions about adultery and monogamy. Couples embrace, kiss and are shown going in and out of hotel rooms together. A couple lives together at the hotel, but one of them is sleeping with other partners. Sonny and Sunaina hug and kiss and discuss wedding plans. Madge is sleeping with two different men in hopes of becoming engaged to one of them. Sonny’s mother accuses him of “pimping” her out.

Violence/Gore: A character is nearly run down by a vehicle.

Which Kids Will Like It? Kids aged 12 and older who like movies set in other countries with a cast of colorful characters. Even though this movie is geared for an older demographic, there’s plenty for moviegoers of all ages to love.

Will Grownups Like It? This sequel is just as sweet, funny and poignant as the first movie.