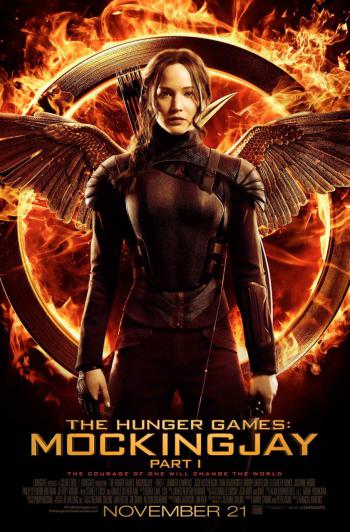 SYNOPSIS: Jennifer Lawrence returns as Katniss Everdeen, the reluctant warrior who fights to save Peeta and a nation moved by her courage in this third adaptation of Suzanne Collins’ popular book series.

REVIEW: I feel like “The Hunger Games” franchise doesn’t have quite the rabid fanbase as “Twilight” or “Harry Potter” or “Lord of the Rings.” Still, about 90 people showed up for the midnight showing of “The Hunger Games: Mockingjay, Part 1″ this week, which is somewhat impressive for Traverse City, Michigan.

And “Mockingjay” IS a good movie, even if they probably could have packed the third and final book into one long movie instead of breaking it into two movies. I don’t mind, though. I love the book series and all the movies so far. I’m fine with an extra movie.

The story picks up with a disoriented and anxiety-ridden Katniss Everdeen (Jennifer Lawrence) in the secret underground bunker, District 13, where the rebels are organizing their strategy. At the end of the previous movie, “The Hunger Games: Catching Fire,” Katniss had destroyed the Arena and been whisked off by the resistance movement, led by President Alma Coin (Julianne Moore, who’s perfect as the calculating leader).

Peeta Mellark (Josh Hutcherson), however, is being held hostage at the Capitol by President Snow (Donald Sutherland), and in televised interviews with Caesar Flickerman (Stanley Tucci), he pleads with Katniss and the resistance to lay down their weapons. It tears Katniss up inside, but she agrees to become the face of the rebellion — the “Mockingjay” — with conditions: Coin must promise to rescue and pardon Peeta and two other surviving victors at the first possible opportunity.

Plutarch Heavensbee (the late Philip Seymour Hoffman – so sad seeing him onscreen) arranges for director Cressida (Natalie Dormer) to film a series of propaganda videos starring Katniss in full Mockingjay mode. Katniss visits her beloved and now decimated District 12 and other rebelling districts, and seeing the devastation clarifies that the Capitol must be destroyed.

Jennifer Lawrence is such a gifted actress, and she captures the despair and volatility of Katniss in this dark installment of the franchise. She’s not the “girl on fire” of the previous films. She’s broken and fragile and needs to find the strength to move forward as a revolutionary leader while also dealing with Peeta’s imprisonment and Snow’s psychological terror.

As with “The Hunger Games: Catching Fire,” director Francis Lawrence is faithful to the source material while offering an emotional and visual experience for filmgoers who haven’t read the books. It helps that author Suzanne Collins is an executive producer on all the films.

Hutcherson doesn’t have much screen time here, but you can feel his transformation from the quiet “Boy with the Bread” in the first movie to the wild-eyed hostage held under Snow’s reign in this one. Liam Hemsworth turns in a poignant performance as Gale Hawthorne, the warrior rebel who loves Katniss so much that he’ll risk his own life to save his rival for her affections. You just wish there was a way they could all live happily ever after.

While “Mockingjay, Part 1″ is not as action-oriented as the previous films, it’s an absorbing and necessary set-up for the final film, where Katniss and the rebels will be in the midst of all-out war. “Mockingjay, Part 2″ is scheduled to hit theaters Nov. 20, 2015.

Violence/Gore: The bones of dead District 12 residents are shown up close. Katniss visits a makeshift hospital, where covered bodies wait to be buried and  people with bloody injuries are shown. Capitol Peacekeepers execute traitors at close range. Capitol bombs are dropped on the districts, causing explosions, mayhem and death. Peacekeepers and rebel fighters kill each other. Peeta looks and acts as if he’s tortured and brainwashed. Katniss is nearly choked by a character.

Drugs/Alcohol: Katniss and other characters are given sedatives. Adults drink unspecified beverages at a Capitol event.

Which Kids Will Like It? Kids 13 and older who’ve read “The Hunger Games” books or like action sci-fi movies centered on teens.

Will Grownups Like It? “The Hunger Games: Mockingjay, Part 1″ is a worthy installment to the franchise and a good set-up for the next movie.