NJ Kids Movie Review: The Hobbit: The Battle of the Five Armies

NJ Kids Movie Review: The Hobbit: The Battle of the Five Armies.   This third installment of “The Hobbit” trilogy finds Bilbo and Company engaging in a war against an array of combatants while keeping the terrifying Smaug from acquiring a kingdom of treasure and obliterating all of Middle-Earth. 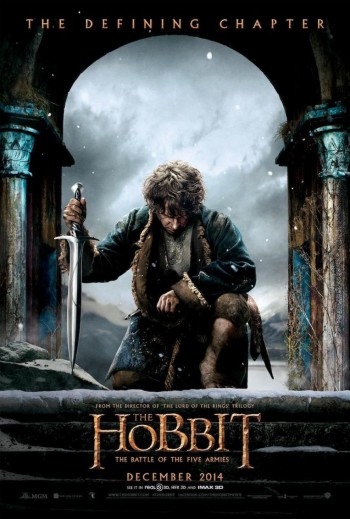 SYNOPSIS: This third installment of “The Hobbit” trilogy finds Bilbo and Company engaging in a war against an array of combatants while keeping the terrifying Smaug from acquiring a kingdom of treasure and obliterating all of Middle-Earth.

REVIEW: At long last, “The Hobbit” trilogy comes to an end with this third installment of the story. There are so many stories within “The Hobbit” and “The Lord of the Rings” franchise that I won’t be surprised if more are told on the big screen.

I wonder if someone will attempt to film “The Silmarillion,” although it would be a massive undertaking, as the book, published posthumously by J.R.R. Tolkien’s son Christopher, describes the universe that encompasses the lands of Valinor, Beleriand, Numenor and Middle-earth. I hope someone does. If so, I’m not sure it will be Peter Jackson, but anything could happen.

“The Hobbit: The Battle of the Five Armies” picks up right where the last installment, “The Desolation of Smaug,” ended. The dragon Smaug (voiced by Benedict Cumberbatch) swoops down from the Lonely Mountain and rains fire on the people of neighboring Lake-town. He is one murderous dragon, and Cumberbatch provides the perfect voice – deeply terrifying and delicious.

Meanwhile, Bilbo Baggins (Martin Freeman), Thorin Oakenshield (Richard Armitage) and the company of dwarves are within the mountain, where Thorin is obsessed with protecting his reclaimed treasure — the massive amounts of gold and jewels, including the coveted Arkenstone, which he has yet to uncover. Armitage could easily have over-acted this storyline, but skillfully walked that fine line of madness.

After the noble Bard (Luke Evans), who’s perhaps my favorite character in this movie because of his strength and love for his children, leads the survivors of Lake-town to safety, he meets elf king Thranduil (Lee Pace), who’s brought an army to secure the elf treasures from the mountain. But Thorin, who’s gone completely over the edge with gold lust, refuses to part with even one coin.

As the elves and humans prepare to fight the dwarves, an even bigger threat is headed their way — Orcs.

I really loved this movie and actually saw it twice — once to review and once with my husband and son, both Tolkien fans. I wasn’t sure about splitting “The Hobbit” into three films, but it makes sense after seeing “Battle of the Five Armies.” We needed that expansion of the story, even though some fans might be miffed at the inclusion of Tauriel (Evangeline Lilly) and Legolas (Orlando Bloom), and Tauriel’s romance with the dwarf Kili (Aidan Turner).

It’s probably good to see the previous two “Hobbit” movies before seeing this one, but even if you don’t, there’s enough backstory to get you up to speed. Director Peter Jackson has crafted a fine ending to the trilogy, with heartbreaking sacrifices, emotional friendships, amazing special effects (I recommend seeing it in 3D), stunning cinematography, lovely music, and a story that honors Tolkien’s work.

I especially love seeing the evolution of the relationship between Thorin and Bilbo, which started out so tenuous at the beginning and grew into a deep friendship.

While there are a few loose ends that didn’t get wrapped up, my husband predicts they’ll probably be resolved in the “extended edition” of the DVD and blu-ray releases.

Sex/Nudity: A male dwarf and female elf are attracted to each other. A male elf loves a female elf, but she doesn’t share his affection.

Violence/Gore: Several intense battle scenes where many characters die, including some beloved characters. The body count is high, and even young children are threatened or killed. Battles and fighting include swords, arrows, rocks and other weapons. A dragon rains fire down on a town, killing and injuring people.  A main character falls under a dark spell of sorts, causing him to threaten people he loves. Some of the orcs are large and threatening.

Will Grownups Like It? Tolkien fans should be happy with this fitting end to “The Hobbit” trilogy.