NJ Kids Movie Review: The Best of Me

SYNOPSIS: This latest Nicholas Sparks romance centers on a pair of former high school sweethearts who reunite years later in their small hometown. 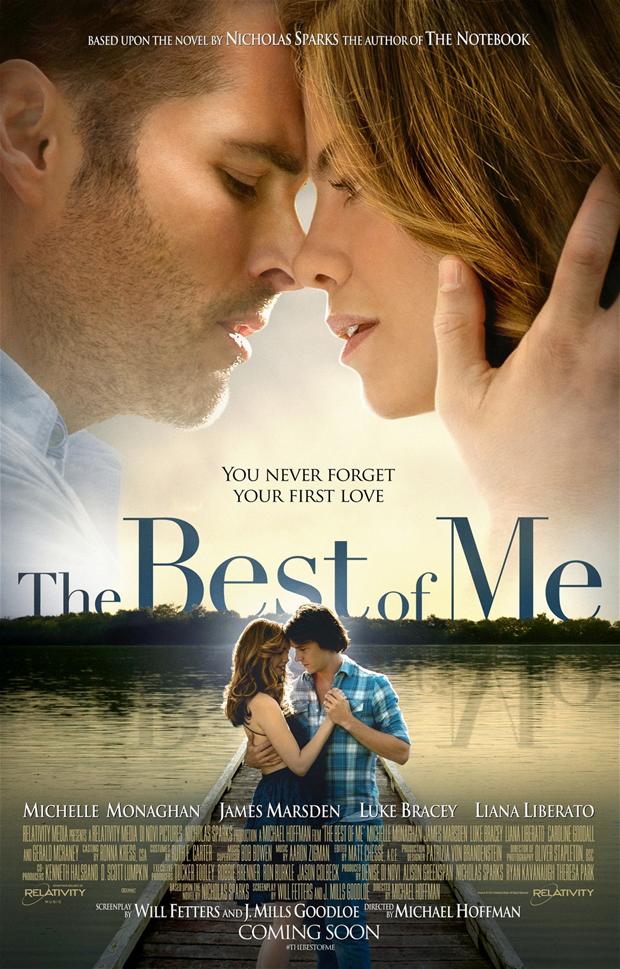 REVIEW: Here’s what I love about Nicholas Sparks movies. You always know what you’re getting. You know there will be romance (obviously), some drama and tragedy, and an ending that will make you go, “What? Again?!” And yet, that’s exactly why I love these movies. It’s why Nicholas Sparks fans go see his movies every year. It’s romance at its best. Why mess with a good thing?

“The Best of Me” has all of that and a beautiful setting in a small southern town. Based on the novel of the same name, the story jumps back and forth in time. It begins with a grown-up Dawson Cole (James Marsden) nearly killed in an oil rig explosion. When he’s thrown into the water, he has a vision of his high school sweetheart Amanda and manages to survive, much to the surprise of his doctors at the hospital.

When Dawson and Amanda (Michelle Monaghan) are summoned back to their small home town to settle the estate of their dear friend Tuck (Gerald McRaney, in a nice-guy role after his not-so-nice Raymond Tusk on “House of Cards”), they’re reunited for the first time in 21 years. Even after all these years, the two still have feelings for each other, and they reminisce about their early years together.

Back in the 1990s, young Dawson (Luke Bracey) was a quiet, smart, handsome guy dealing with an abusive father and brothers. These guys are bad! Straight out of “Deliverance.”

Meanwhile, young Amanda (Liana Liberato) comes from a rich, privileged family. She’s smart and beautiful, and doesn’t want a spoiled rich boyfriend. She’s drawn to Dawson, who comes to her rescue when her car dies. The two begin a romance, as Dawson is taken in by the kindly father-figure Tuck, who lives alone after losing his wife to illness.

Bracey and Liberato are gorgeous and have great chemistry. Bracey has that kind of loner vibe that reminds me of Patrick Swayze in “Dirty Dancing” (only Amanda has to teach Dawson how to dance). He’s brooding and soulful, while Amanda is loving and open — the “opposites attract” theory of romance.

The older couple, played by well-known actors Monaghan and Marsden, have similar good chemistry, and you really WANT them to find true love and happiness. Amanda is married now, but the marriage isn’t working and their teenage son is about to head off to college, paving the way for her to rekindle a life with Dawson, who apparently has been pining over her for two decades.

Sure, you can see the plot twists and turns coming a mile away. You might not know exactly how things will play out, but you know there will be drama and romance and maybe someone will die.

But why mess with a proven formula? Nicholas Sparks knows his fans so well, he can practically see inside their heads and deliver their dreams. I’m cool with that.

Sex/Nudity: Lots of passionate kissing throughout. A couple makes love both as teens and as adults, but no nudity is shown. A wife cheats on her husband. A high school girl has an unexpected pregnancy.

Violence/Gore: A father beats his son and threatens him, as do the boy’s brothers. They also severely beat another man until he’s unconscious. Some arguing and shooting; a character is shot and killed.

Drugs/Alcohol: A teen drinks liquor offered to him by his girlfriend’s father. A grown-up couple drink beer and wine. Amanda’s husband drinks to excess, then drives while drunk. Dawson’s family drinks beer, and they seem to be drug dealers (possibly meth).

Which Kids Will Like It? Kids 14 and older who like romantic movies or Nicholas Sparks movies or books.

Will Grownups Like It? Fans of Nicholas Sparks books or movies will find plenty to love here. There are some good messages about love and family, and I love the father-son relationship between Tuck and Dawson, even though they’re not blood relatives.