The Summer of 2016 is looking good for family movies! Captain America, Alice Through the Looking Glass, Pete's Dragon and The Secret Life of Pets are all hitting the big screen as the weather warms up. Let's take a closer look at all the new family movies coming up. Note that release dates are subject to change.

This installment in the popular Marvel franchise finds Steve Rogers leading the  newly formed team of Avengers in their continued efforts to safeguard humanity. But after another incident involving the Avengers results in collateral damage, political pressure mounts to install a system of accountability, headed by a governing body to oversee and direct the team. The new status quo fractures the Avengers, resulting in two camps. One is led by Steve Rogers (Chris Evans) and his desire for the Avengers to remain free to defend humanity without government interference. The other follows Tony Stark’s (Robert Downey, Jr.) surprising decision to support government oversight and accountability. Directed by Anthony Russo and Joe Russo, this movie also stars Scarlett Johansson, Sebastian Stan, Anthony Mackie and Jeremy Renner.

In this 3D animated comedy, we'll finally find out why those birds are so angry! The story takes us to an island populated entirely by happy, flightless birds - well, mostly. In this paradise, Red (voiced by Jason Sudeikis), a bird with anger issues, speedy Chuck (Josh Gad), and the volatile Bomb (Danny McBride) have always been outsiders. But when the island is visited by mysterious green piggies, it’s up to these unlikely outcasts to figure out what the pigs are up to. Directed by Fergal Reilly and Clay Kaytis, this cute family movie also features the voices of Maya Rudolph, Kate McKinnon and Keegan Michael Key.

ALICE THROUGH THE LOOKING GLASS

Featuring the unforgettable characters from Lewis Carroll’s beloved stories, this sequel to 2010's "Alice in Wonderland" finds Alice (Mia Wasikowska) returning to the whimsical world of Wonderland. She's spent the past few years following in her father’s footsteps and sailing the high seas. Upon her return to London, she comes across a magical looking glass and returns to the fantastical realm of Wonderland and her friends the White Rabbit (Michael Sheen), Absolem (Alan Rickman), the Cheshire Cat (Stephen Fry) and the Mad Hatter (Johnny Depp). But the Hatter has lost his Muchness, so Mirana (Anne Hathaway) sends Alice on a quest to borrow the Chronosphere, a metallic globe inside the chamber of the Grand Clock which powers all time. Returning to the past, she crosses paths with friends and enemies at different points in their lives, and embarks on a perilous race to save the Hatter before time runs out.

Following 2014's smash hit "X-Men: Days of Future Past," director Bryan Singer returns with this installment in the "X-Men" franchise. Since the dawn of civilization, Apocalypse, the first and most powerful mutant, has amassed the powers of many other mutants, becoming immortal and invincible. Upon awakening after thousands of years, he's disillusioned with the world and recruits a team of powerful mutants, including a disheartened Magneto (Michael Fassbender), to cleanse mankind and create a new world order, over which he will reign. As the fate of the Earth hangs in the balance, Raven (Jennifer Lawrence) with the help of Professor X (James McAvoy) must lead a team of young X-Men to stop their greatest nemesis and save mankind from complete destruction. This movie also stars Oscar Isaac, Nicholas Hoult and Rose Byrne.

Based on the bestselling novel by Jojo Moyes, this movie stars Emilia Clarke ("Game of Thrones") and Sam Claflin ("The Hunger Games"), under the direction of Thea Sharrock, making her feature film directorial debut.  Louisa "Lou" Clark (Clarke) lives in a quaint town in the English countryside. With no clear direction in her life, the quirky and creative 26-year-old goes from one job to the next in order to help her tight-knit family make ends meet. Her normally cheery outlook is put to the test, however, when she faces her newest career challenge. Taking a job at the local "castle," she becomes caregiver and companion to Will Traynor (Claflin), a wealthy young banker who became wheelchair bound in an accident two years prior. No longer the adventurous soul he once was, the now cynical Will has all but given up - until Lou shows him that life is worth living.

TEENAGE MUTANT NINJA TURTLES: OUT OF THE SHADOWS

Cowabunga! This sequel to the 2014 film is based on the pizza-loving Teenage Mutant Ninja Turtles characters created by Peter Laird and Kevin Eastman. Directed by David Green ("Earth to Echo") and produced by Michael Bay ("Transformers"), the story finds the Turtles in conflict with T.C.R.I. scientist Dr. Baxter Stockman (Tyler Perry), the Foot Clan and The Shredder (Brian Tee), who's hired Stockman to create mutants of his own. Meanwhile, an invasion above New York City is led by the Dimension X inhabitant known as Krang. The Turtles are joined in the fight by Splinter (Tony Shalhoub) and their human friends April O'Neil (Megan Fox), Vern Fenwick (Will Arnett) and the vigilante Casey Jones (Stephen Amell).

"Warcraft" is a 3D epic adventure of world-colliding conflict based on Blizzard Entertainment’s gamer universe. Directed by Duncan Jones ("Moon," "Source Code") and written by Charles Leavitt and Duncan Jones, the film stars Travis Fimmel, Paula Patton, Ben Foster, Dominic Cooper and Toby Kebbell. The world of Azeroth stands on the brink of war as its civilization, led by the humans, face a fearsome race of invaders: orc warriors fleeing their dying world of Draenor to find their place in another. As a gateway known as the Dark Portal opens to connect the two worlds, the humans face destruction while the orcs face extinction. The leaders of both groups are sent on a collision course that will decide the fate of their families, their people and their home

This sweet Disney Pixar movie centers on Dory, the loveable memory-challenged Blue Tang fish, as she searches for answers about her past. The story takes place six months after "Finding Nemo," as Dory suddenly recalls her childhood memories, including something about "the jewel of Monterey, California." Thus, she sets off to find her family, accompanied by friends Nemo and Marlin. When Dory arrives at the Monterey Marine Life Institute, she meets Bailey, a white beluga whale; Destiny, a whale shark; and Hank, an octopus, who becomes her guide. Directed by Andrew Stanton and Angus MacLane, this movie features the voice cast of Ellen DeGeneres, Ed O'Neill, Ty Burrell, Albert Brooks and Kaitlin Olson.

After 1996's "Independence Day" redefined the event movie genre, this next epic chapter continues the sci-fi thrills. Taking place 20 years after the events of the first film, the international community has recovered and the United Nations has created the Earth Space Defense (ESD), a united global defense program that serves as Earth's early warning system. It's also our main defense force, using technology salvaged from remains of the alien forces. However, the aliens were able to send a distress signal to their other battalions before their final defeat, while others went into hiding elsewhere around the world. The aliens in deep space received the signal and sent a larger battle fleet, threatening the human race yet again. Only the ingenuity of a few brave men and women can bring our world back from the brink of extinction. Directed by the king of the blockbusters Roland Emmerich, this movie stars Liam Hemsworth, Jeff Goldblum, Bill Pullman, Judd Hirsch and Vivica A. Fox.

One Reel – Even the Force can’t save it.
Two Reels – Coulda been a contender.
Three Reels – Something to talk about.
Four Reels – You want the truth? Great flick!
Five Reels – Wow! The stuff dreams are made of.

Jane Boursaw is the film critic and editor-in-chief of Reel Life With Jane. Contact her at jboursaw@charter.net. Images used with permission of the studios and distributors. 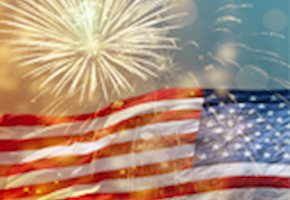 July 4th Fireworks and Celebrations Across NJ Want to see the sky lit up with red, white, and…