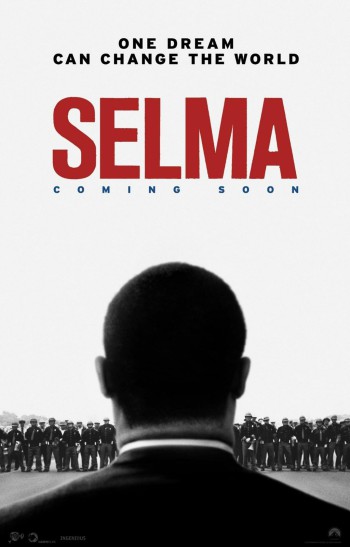 REVIEW: I was just a wee lass when the march from Selma to Montgomery took place in 1965, so it’s wonderful to see this historic event brought to life on the big screen. From the footage I’ve seen of Martin Luther King, Jr., David Oyelowo really becomes him in this film.

“Selma” follows the three months that take place between Martin Luther King, Jr. (Oyelowo) accepting his Nobel Peace Prize in December of 1964 and the historic Selma-to-Montgomery march for voters’ rights in March of 1965.

King, along with fellow activists in the Southern Christian Leadership Conference, want President Lyndon B. Johnson (Tom Wilkinson) to pass legislation protecting the voting rights of African Americans in the South. Johnson, however, is more interested in poverty issues and asks King to wait.

With help from John Lewis (Stephan James) of the Student Non-Violent Coordinating Committee (SNCC), King begins to organize the march, which turns violent as Alabama State Troopers beat the marchers as they attempt to cross the Edmund Pettus Bridge.

Meanwhile, King’s efforts are weakened by the FBI, who reveals King’s infidelities to his wife, Coretta Scott King (Carmen Ejogo). It’s not glossed over, which helps to make this film an honest look at King’s life. He may not have been the best husband, but he was a stellar leader of the civil rights movement.

Helmed by writer-director Ava DuVernay, “Selma” details a very specific time in King’s life, which I think helps audiences to connect with the story, the man, and the historic significance of the event. Oyelowo, who’s perfectly cast as the civil rights leader, skillfully captures his speech rhythms and philosophy of “negotiate, demonstrate, resist” to move the country forward.

Parts of the film are brutal and grim, with white supremacists beating the nonviolent protestors to death, in some cases. Oprah Winfrey is especially poignant as Annie Lee Cooper, a woman who’s unable to register to vote and who’s beaten more than once but never backs down.

A beautiful script, excellent performances, and gripping subject matter make “Selma” one of the best films ever made about the civil rights movement. I hope it’s shown in history classes across the country.

At the New York premiere of “Selma,” Reel Life With Jane writer Paula Schwartz chatted with the stars on the red carpet. I especially love what Oprah Winfrey had to say about the power of movies to affect social change.

“Movies allow you to think about what’s been done before and allow you to see – in this movie, in particular – what’s come before, and to me, it’s really about the rigorous discipline of peaceful protest and what strategy does when you know what you want.”

Sex/Nudity: Couples embrace and kiss. In one scene, Coretta listens to a recording of two people having sex, presumably to make her think it’s her husband and a mistress. Coretta and Martin discuss his infidelity.

Violence/Gore: White supremacists terrorize and attack black marchers with sticks, guns, whips and bats. Police use tear gas and batons to beat non-violent protestors. A church is blown up, killing several girls. A white clergyman is beaten to death. References to lynchings and the murders of Medgar Evars, Malcolm X, and Robert F. Kennedy. A non-violent black protestor is beaten to death and taken to the coroner’s office.

Will Grownups Like It? “Selma” is an excellent film – great acting, story and production.