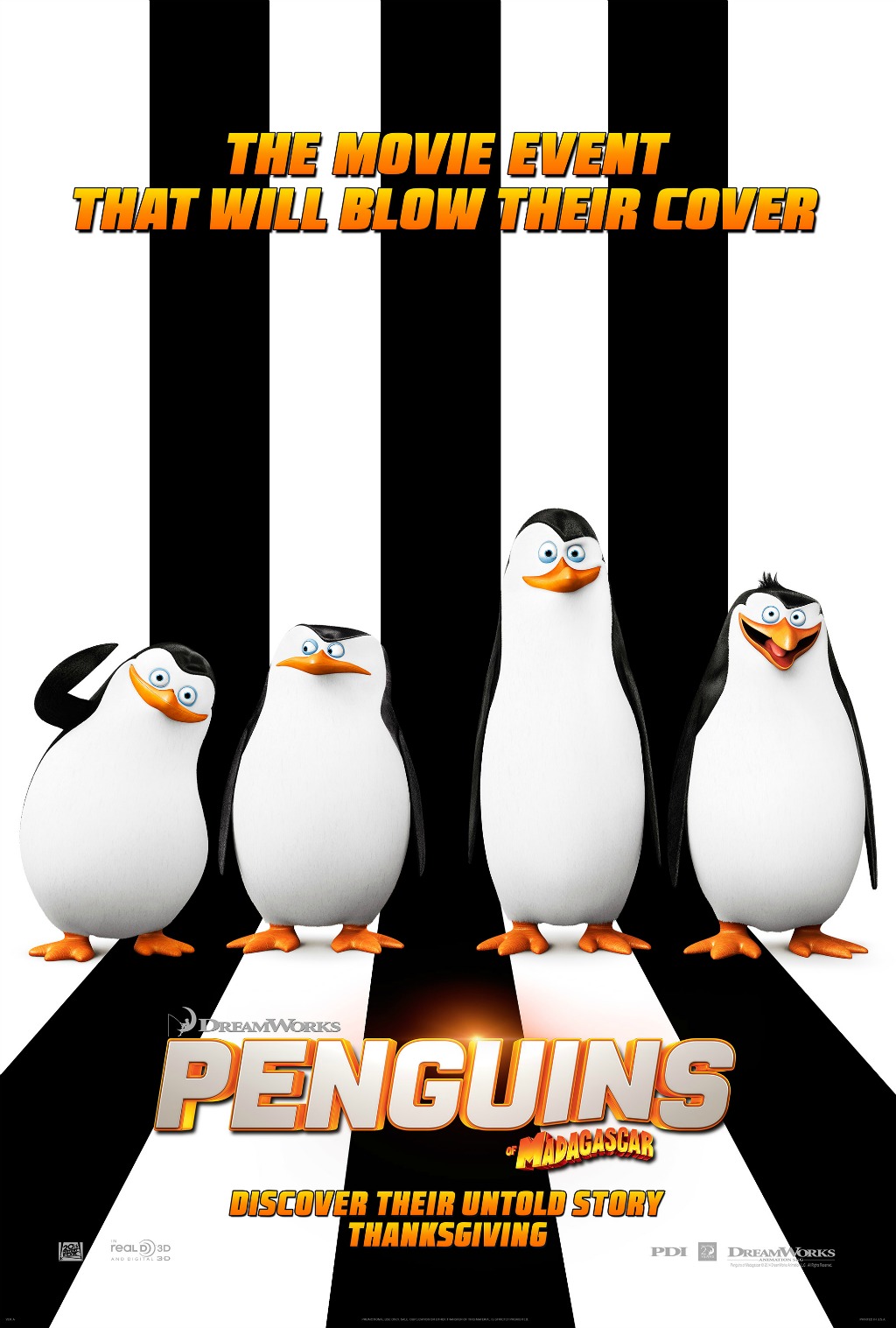 SYNOPSIS: Those wacky penguins Skipper, Kowalski, Rico and Private join forces with undercover organization The North Wind to stop the villainous Dr. Octavius Brine from destroying the world!
Reel Rating: 3.5 out of 5 Reels

REVIEW: DreamWorks has built quite the franchise around the Madagascar gang, and this movie is all about the penguins, who also have their own TV show on the Nickelodeon Network. They’re cute and colorful, and their action-packed adventures are perfect for kids 7 and older.

Turns out his original name was “Dave,” and he’s still mad about all the attention the penguins stole from him at New York’s Central Park Zoo when they were younger. Thus, he sets out to destroy them. I know, right? It’s like, get over it, man. Move on with your life. But no, this octopus is out for revenge.

The penguins manage to escape Dave’s 8-tentacled clutches, only to be rescued by an elite team of secret agents called the North Wind, led by a wolf known as “Classified” (Benedict Cumberbatch). Together, they must figure out how to defeat Dave and save the penguins of the world. Yes, he’s so furious about the whole Central Park Zoo thing that he’s going to take ALL the penguins down! Talk about anger issues.

Benedict Cumberbatch is surely one of the hardest-working actors right now. Along with smart dramas like “The Imitation Game,” “The Fifth Estate” and the BBC/PBS TV series “Sherlock,”  he’s become the go-to guy for voices. He’s the voice of Smaug the dragon in “The Hobbit” movies and will voice Shere Khan the snake in the upcoming “Jungle Book: Origins” movie (in theaters in 2016). He’s excellent here as the James Bond-like Wolf and leader of the North Wind.

Malkovich is also perfectly cast as the creepy and bitter octopus, and other voices include Ken Jeong as Short Fuse, Peter Stormare as Corporal, and Andy Richter as Mort. For the art house crowd, listen closely and you’ll hear Werner Herzog’s voice as the documentary filmmaker. In real life, of course, he’s a famous documentarian. Love that.

But it’s really all about the penguins. Along with the spy caper, we learn a bit about their sweet  backstory — how they first teamed up in the Antarctic and how they consider themselves family. While I wouldn’t put this movie in the same category as “Finding Nemo” or even the main “Madagascar” movies, there’s enough action and humor to keep fans happy.

Sex/Nudity: Kowalski’s love interest is Eva the owl. He follows her around, and she eventually kisses him, leaving lipstick marks all over his face.

Violence/Gore: Lots of chases, explosions and perilous scenes. The penguins are kidnapped by an evil octopus who’s plotting to kidnap all the penguins in the world. Penguins are imprisoned in jail-like cages. The penguins fight octopi, and a monster penguin eats a baby kitten, then spits it out. The penguins get sucked out of a plane and end up trapped on a boat with no food or water. They’re also turned into monsters who scare the zoo visitors. In one scene, it appears that one of the main penguins has been killed.

Profanity: Pop culture references like “Parker Posey!” are used like swear words. After the penguins are turned into monsters, one has a “butt hand” — a hand coming out of his butt.

Drugs/Alcohol: Government agents drink what appears to be champagne.

Which Kids Will Like It? Kids 7 and older who like the Madagascar movies or animated movies that are bright, colorful and action-packed.

Will Grownups Like It? “Penguins of Madagascar” is a cute movie, but don’t be surprised if you doze off somewhere in the middle.