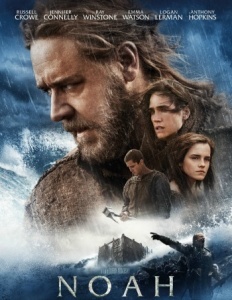 SYNOPSIS: Russell Crowe plays the title character in “Noah,” the man chosen by God to build an ark before an apocalyptic flood destroys the world.

REVIEW: I admit I’m not up on my Bible studies as much as I should be, but despite the contrasts between the story told in the Bible and director Darren Aronofsky’s film, I still really liked this movie. I went into it determined to view the movie on its own merit, and in that way, it delivers as an entertaining, well-cast, well-written movie with great special effects.

Russell Crowe plays Noah, a gentle, non-carnivorous, earth-loving descendant from the line of Seth, son of Adam and Eve. God reveals to Noah that he’s going to deliver a devastating flood that will wipe out humanity. A clean slate, if you will, to cleanse the world of evil. 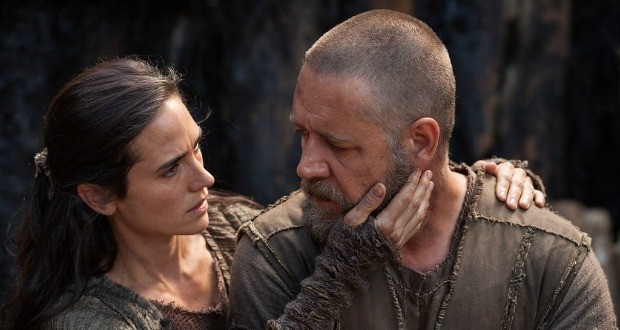 The task which God (who’s mentioned in the movie only as “the creator”) puts before Noah is undeniably weighty and impossible. First up, build an ark. One strong enough to withstand a massive flood and big enough to house two of every living creature, along with Noah’s family.

Noah also has to reconcile his own plan with God’s plan, and figure out whether his choices fit with God’s big picture. And he has to make some very difficult choices that weigh heavily on his psyche. Russell Crowe is up to the task, though, injecting the character with a range of emotions encompassing faith, doubt, responsibility and commitment. He can also throw a punch when he needs to.

Meanwhile, Noah’s wife Naameh (Jennifer Connelly) and sons Shem (Douglas Booth), Ham (Logan Lerman), and Japheth (Leo McHugh Carroll), and adopted daughter Ila  (Emma Watson) struggle with their own doubts about God’s plan for Noah. They didn’t sign up for this, and they’re not immune to frustration, sadness and despair when faced with devastating loss.

The bad guy here is Tubal-cain (Ray Winstone), who vies for supremacy as Noah builds the ark and embarks on the legendary oceanic voyage. Tubal-cain is a real Biblical figure, and I have no idea what he might have looked like, but here, he looks like a character out of “Mad Max.”

“Noah” is a masterful piece of filmmaking, and I expect nothing less from Aronofsky. But this is no light-hearted, uplifting tale from the Bible. It’s dark, gloomy, grimy and most of all, wet. People die in awful circumstances, fights break out when people can’t get onboard the ark, and the floods are massive, bursting forth in a cataclysmic way from the heavens and earth.

This movie boasts lots of special effects, as you might imagine, not only the amazing ark and landscape (a forest rises up from barren ground to supply wood for the ark), but also the “Watchers,” fallen angels that are resurrected as massive stone creatures which look like something out of a Peter Jackson movie. As I understand it, Watchers are a very ancient tradition, going back some 2,000 years in Jewish and Christian theology. However, I’m not sure they go back as far as the Book of Genesis.

As for other dissimilarities from the Bible story, most of it is open to interpretation. Noah is young here (as opposed to 600 years old in the Bible, but who knows how they counted time back then?); the animals are gently put to sleep on the ark with some sort of herbal incense; it took Noah ten years to build the ark here (as opposed to seven days in the Bible); and there’s some debate about Ham’s descendents in the movie. Lots of questions!

But at the same time, “Noah” is very much a deep, Biblical tale. Most of the lines can be pegged to Bible verses, both a raven and a dove make an appearance, the actors are all seasoned veterans in their own way and can pull off a film of this scope (especially Crowe, and Anthony Hopkins as Methuselah), and the whole feel of the movie is epic. Maybe not as epic as “Ben-Hur” or “The Ten Commandments,” but right up there.

The main reason it didn’t get five reels from me is because the middle section seems to plod along a bit, but overall, “Noah” is definitely worth a look. I recommend viewing it on its own merit with a nod towards the Bible, rather than a detailed account of the Bible story.

Sex/Nudity: Much talk of finding wives for the sons, in order to procreate. Some passionate kissing and a scene which leads to sex (we don’t see it, but a character is pregnant afterwards). A character gives birth, and we see her anguish in doing so.

Violence/Gore: Enemies club, stone, stab, or spear each other to death. A few scenes show mass graves, both on dry land and underwater. Dead bodies are shown close up, some without limbs. A character threatens to kill babies and nearly does. Humans resort to violence in a fight to stay alive. Lots of destruction shown from flooding, as well as fires and battles.

Profanity: “Damned” is as bad as it gets.

Drugs/Alcohol: A man drinks a beverage that brings on visions. A character appears to be drunk in one scene.

Which Kids Will Like It? Kids 13 and older who like epic movies, Biblical history, or movies starring Russell Crowe, Emma Watson, Jennifer Connelly or Logan Lerman.

Will Parents Like It? “Noah” is quite dark and violent, at times. The movie takes liberties with the Biblical story, but it’s a well-done film with great visual effects. Underlying themes include man’s connection to nature, faith in a creator, the power of choice, and the devotion of family in the most dire of circumstances.