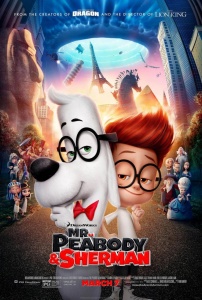 SYNOPSIS: "Mr. Peabody & Sherman" follows the time-travelling adventures of a super-smart dog and his adopted human son, as they work to fix a time rift they created.

REVIEW: If you’re thinking that “Mr. Peabody & Sherman” will be anything like the classic cartoon on which it’s based, you’re mistaken. Yes, the characters are similar to the characters from “Peabody’s Improbable History” segments of the 1960s animated TV series “The Rocky and Bullwinkle Show.” And one of the executive producers of this movie, Tiffany Ward, is the  daughter of Jay Ward, one of the creators of the TV series. But other than that, it just doesn’t have the same vibe as the original series.

The TV series delivered a smartly-written, funny show that both kids and adults could enjoy. The characters were creative and colorful enough to keep kids happy, and the jokes were sly enough to entertain adults, without being too adult-ish for kids. This movie doesn’t achieve that same fine line. 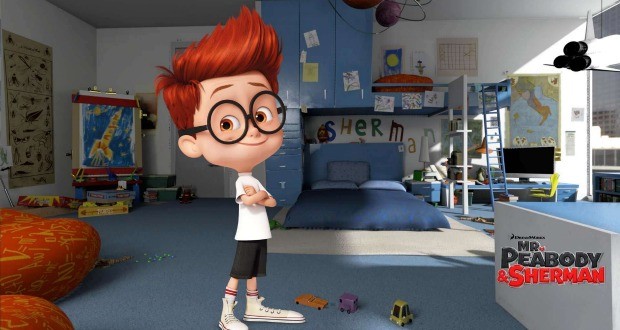 “Mr. Peabody & Sherman” follows the adventures of genius talking dog Mr. Peabody (voiced by Ty Burrell), a titan of industry, inventor, musician and  scientist whose greatest accomplishments are raising his 7-year-old adopted son, Sherman (Max Charles), and creating a time machine known as the WABAC (get it? “way back”?).

After Sherman gets into a school fight with his bullying classmate Penny (Ariel Winter, “Modern Family”), Mr. Peabody invites her family over to patch things up, and the kids end up playing around with the WABAC. To impress the girl, Sherman takes her for a ride in the WABAC, and they end up in ancient Egypt, where Penny gets engaged to Pharaoh Tutankhamun. Sherman goes back to get Mr. Peabody, and the two return to Egypt to retrieve Penny, explaining that she’ll be killed upon Tut’s death. She’s dragged to the wedding, while the duo are imprisoned after saying they’ll stop the ceremony.

I don’t know about you, but all of this seems pretty heavy-duty for a movie geared for kids six and older. And that’s just the beginning. There’s also a storyline about Sherman being taken away from Mr. Peabody by Children’s Services; the WABAC crash-landing in the middle of the Trojan War (with the Trojan Horse rolling out of control with Penny inside, and Mr. Peabody appearing to be killed in the wreckage); Mr. Peabody and Sherman escaping in the WABAC after someone calls Animal Control on Peabody (admittedly, the dog bit this woman after she hurt Sherman);  and a trio of U.S. Presidents — George Washington, Abraham Lincoln and Bill Clinton — declaring their support for Peabody’s legal custody of Sherman.

Just writing all that makes my head spin. Add in a black hole/space-time vortex rift and the whole thing is a crazy mess. I do like the father-son angle, and the idea that a genius dog who’s skilled in everything from cooking to cocktails to rocket science learns to bond with his human son. Trust, communication, unconditional love — all good.

But the rest of it? A muddle of historical tidbits, physical comedy, puns that aren’t that funny, and an unlikeable character in Penny, who’s selfish and a bully throughout most of the movie (she does redeem herself in the end).

Instead of taking your kids to see “Mr. Peabody & Sherman,” I recommend watching the original cartoon series with them instead. The writing is actually smart and funny, and you get the added bonus of “Rocky & Bullwinkle.”

Sex/Nudity: Penny is engaged to marry the young King Tut. Agamemnon “kidnaps” Mrs. Grunion and is later shown marrying/kissing her.

Violence/Gore: The ancient Egyptians imprison Mr. Peabody and Sherman, who nearly die several times in the Great Sphinx. The Greeks chant “blood! blood! blood!” in preparation for battle with the Trojans. In one scene, Mr. Peabody sacrifices his safety for the sake of Sherman and Penny, and it appears that he’s fallen to his death. During the French Revolution, Robespierre deems Sherman and Mr. Peabody part of the aristocracy and sentences them to death. Mr. Peabody is shown under the guillotine (complete with historically accurate basket for the head!). The blade actually drops (wait, what?!), but he manages to escape using his intellect. Sherman, Mr. Peabody, Penny and other characters are often in dire peril but always survive.

Drugs/Alcohol: Mr. Peabody is shown elaborately mixing cocktails for Penny’s parents, including a drink called “Einstein on the Beach.”

Will Parents Like It? “Mr. Peabody & Sherman” bears little resemblance to the classic cartoon, but it’s colorful and teaches kids about historical events. Still, I recommend watching the original cartoon series instead of this movie.

House of Dezign offers fashion design classes for teens throughout the year. These…

Calling all fashionistas!...Does your child want to create, design and sew? They can this summer at…