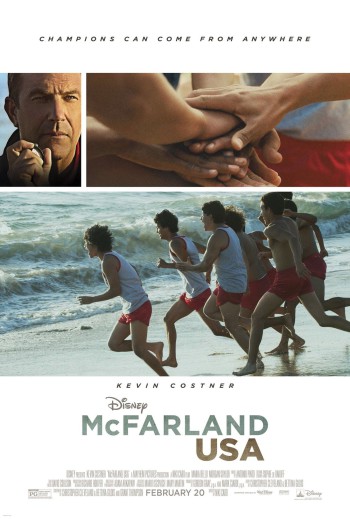 SYNOPSIS: In the small California town of McFarland, Kevin Costner plays a high school cross country coach who transforms a team of athletes into championship contenders.

REVIEW: Kevin Costner has been in a string of movies lately — “Black or White,” “Draft Day,” “Jack Ryan: Shadow Recruit” and “3 Days to Kill,” among them — and I’m perfectly fine with that. I’ve always liked that “gruff guy with a heart of gold” thing he’s got going, and when he looks at someone, it feels like he’s looking into their soul (I apologize for that cliché-ridden sentence, but it’s true). There aren’t many actors who’ve perfected that.

Based on a true story, “McFarland, USA” takes place in a small town in Northern California where kids don’t have a lot of options. Located near Bakersfield, it’s one of the poorest towns in America, and kids either grow up to become field workers like their parents or they end up in prison.

The year is 1987, and disgraced high school coach Jim White (Kevin Costner) moves his wife (Maria Bello) and two daughters to McFarland to teach high school gym there. But he begins to see a trend with some of the McFarland students — they can run. As he tells the principal, the kids already carbo load on rice and beans, and working in the fields, they’re acclimated to the extreme heat. One day, White follows one of the students, Thomas (Carlos Pratts), with his car and discovers the kid can run almost a five-minute mile.

Thankfully, California has approved funding for a cross-country coach and equipment, so White assembles a motley crew of runners, ranging from the broody Thomas (who only joins to avoid getting suspended), Johnny (Hector Duran), Victor (Sergio Avelar), and the three Diaz brothers, even though one of them (Danny, played by Ramiro Rodriguez) is bigger than the average distance runner. He’ll be the anchor, Coach assures him.

As White coaches the runners, he learns about the Mexican community there –their culture, work ethic and love of family. In short, he’s found a place where he feels at home in the unlikeliest of places. Likewise, the kids learn to work together as a team and begin training for California’s first statewide cross-country championship.

“McFarland, USA” has all the usual things you’ll find in a good sports movie — inspirational speeches, grueling training scenes (up and down mounds of almond husks, in this case), and people who go outside their comfort zone to make things happen. It also has a ton of heart.

Both the kids and the coach grow emotionally and learn to look beyond their own personal stereotypes. They have nothing to lose, and they know it. I especially love the chunky Danny, because he’s optimistic and never gives up, despite being the least likely runner of the group.

There’s also a great scene where Coach White — who’s unaccustomed to the heat and isn’t a spring chick to begin with — glances at his daughter’s Barbie bike and realizes it’ll make a great pacer. So before you know it, he’s out there riding the Barbie bike along with the runners. He doesn’t care what it looks like.

I really needed this movie right now, because running your own business gets exhausting at times. You have to get up every day and wear ten different hats and try to squeeze 30 hours of work into 14 hours. So whenever an inspirational sports movie comes along, I glean as much encouragement out of it as I can. There are always people telling you that [fill in the blank] can’t be done, and along comes a movie like “McFarland, USA” that proves you can do whatever you set your mind to.

Be sure and stay through the end credits to see the real-life runners and find out what happened to them after the events of the movie.

Sex/Nudity: Young adults flirt, hold hands, hug, dance and kiss. A married couple hug and kiss each other. A young woman is pregnant.

Violence/Gore: Coach White is fired from a job after throwing a cleat too close to a football player’s head, causing blood on the player’s face. A man shouts at his wife, throws a beer bottle at the wall, and punches the wall in anger. A character gets in a fight with someone who insults his sister. Two kids end up in the hospital after a knife fight. A character seems like he’s going to kill himself by jumping into traffic.

Which Kids Will Like It? Kids aged nine and older who like inspirational sports movies, or movies about runners.

Will Grownups Like It? “McFarland, USA” is a lovely film, full of heart and warmth.