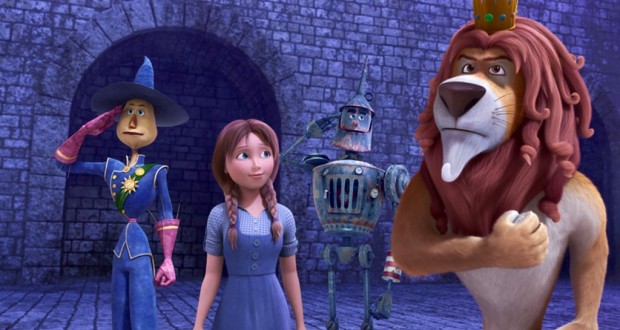 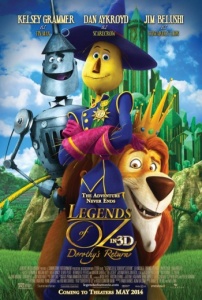 SYNOPSIS: It’s a return to Oz, as Dorothy wakes up in post-tornado Kansas only to be whisked back to the Yellow Brick Road to save old friends the Scarecrow, Lion, Tin Man and Glinda from a devious new villain, the Jester. Will she restore happiness to the Emerald City?

REVIEW: You know how “The Wizard of Oz” was kind of scary? I’m still emotionally traumatized from seeing it as a kid. Those flying monkeys! That evil green witch! And the big question: will Dorothy get back to Kansas?!

So when I heard there was an animated sequel to the classic movie coming to theaters, my first thought was, cool, maybe it will be less scary than the original movie. Well, the animation automatically makes it less scary than live-action, but it still has plenty of scary moments for little kids. The worst is when a character is sentenced to death for eating candy. Really? That’s harsh.

The story picks up directly after “The Wizard of Oz.” Dorothy (voiced by “Glee’s” Lea Michele) is back in Kansas, and her family and community are dealing with the after-effects of the tornado. Farms are labeled as condemned, forcing the farmers — including her own Auntie Em and Uncle Henry (Tacey Adams, Michael Krawic) — to pack up their belongings and move elsewhere. Dorothy, who apparently has a real calling as an anti-bureaucratic activist, is determined to stand strong. Until…

She’s swept into a giant rainbow and transported back to Oz. Her friends — the (now smart) Scarecrow (Dan Aykroyd), the (now brave) Cowardly Lion (James Belushi), and the (now super emotional after getting a heart) Tin Man (Kelsey Grammer) — need her help. The Wicked Witch’s brother, the Jester (Martin Short), has imprisoned Glinda (Bernadette Peters), along with several others, and turned them into marionettes.

The Emerald City is in dire straits, and Dorothy is called upon to set things right. Fortunately, she has a new rag-tag bunch of friends to help her: Wiser the Owl (Oliver Platt), Marshall Mallow (Hugh Dancy), China Princess (Megan Hilty), and Tugg the Tugboat (Patrick Stewart). Still, the Jester is a formidable foe. And then there’s those nightmarish flying monkeys!

First, the good stuff. The voices in this movie are incredible. It’s rare to have a cast as accomplished as the aforementioned actors all in one movie. The animation is sharp and colorful, and Dorothy and Toto are as sweet as the land of candy through which they must venture. And there’s a modern feel to it. Auntie Em is wearing jeans now.

But “Legends of Oz: Dorothy’s Return” is nowhere near as iconic as “The Wizard of Oz,” and neither are the songs, even though Lea Michele is a musical pro. The highlight of the score is a fun duet sparked by the budding romance of odd couple China Princess and Marshall Mallow.

With Dorothy’s new sidekicks on board, we don’t get to see much of the Lion, Tin Man, and Scarecrow, and we miss them, especially given the talented voices. As the Jester, Martin Short is his usual over-the-top self, but way too operatic and frightening for little kids.

And speaking of frightening, there’s that death sentence for eating candy, along with China dolls who crack into pieces and characters shot with arrows, tortured, and made into marionette puppets. It’s all too much for wee ones.

The story is by Roger Stanton Baum, great-grandson of L. Frank Baum, the original creator of the “Oz” series, and grandson of Frank Joslyn Baum, who published “The Laughing Dragon of Oz” in 1935. I was expecting more, given the family lineage, but I’m hoping for the best with any upcoming “Legends of Oz” movies.

Violence/Gore: Lots of violence for a kid’s movie, made more intense by the 3D version, including battle scenes between flying monkeys and chocolate soldiers. A character is injured severely, which might upset young viewers. A character is sentenced to death for eating candy. The Lion, Tin Man, and Scarecrow are tortured by a villain, including submerging the Tin Man in water and attaching the Scarecrow to a spinning wheel surrounded by fire. Kansas is ravaged by the tornado that originally transported Dorothy to Oz.

Which Kids Will Like It? Kids 6 and older who like colorful animated movies (though I can’t recommend it given the intense themes).

Will Parents Like It? Dorothy is brave and caring, and stands up for what’s right, to the point of being an activist. Courage, generosity and determination are also found in the characters, but the violence and action is too intense for little ones. 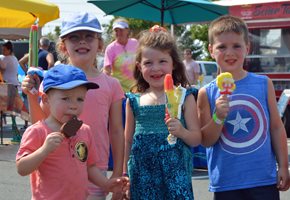