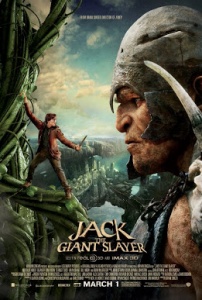 SYNOPSIS: The classic fairytale gets a makeover in this fun tale about a young farmhand named Jack who comes into possession of some magic beans, re-igniting an ancient war between humans and a race of giants.

Sex/Nudity: A young male and female are attracted to each other, hold hands, hug and kiss twice. 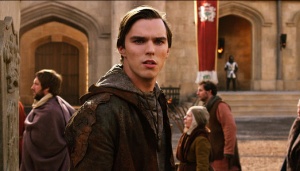 Violence/Gore: Lots of fantasy violence and a high body count. People fall to their deaths; are eaten, trampled and burned alive; chased and ripped apart (mostly from a distance) by giants; and squashed when the massive beanstalk falls to earth. Giants are killed by flaming arrows, knives and swords. A man is rolled into a pastry and nearly baked in a giant's oven.

Profanity: One interrupted "f*ck"(totally unnecessary to the story), and a few uses of "damn," "hell," "piss off," and "ass." Mild insults like "idiot" and "stupid." Scatological humor like burping, farting and eating boogers. 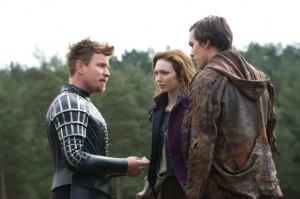 Which Kids Will Like It? Kids 12 and older who like fantasy stories with lots of action, cool special effects, and a bit of romance.

Will Parents Like It? It's very fun and a great take on a classic tale. The PG-13 rating is on-target, though I'd say it's fine for kids 12 and older.

REVIEW: We've been deluged with fairytales on the big and small screens lately, and that's fine with me. "Once Upon a Time," "Grimm," and "Beauty and the Beast" are a few current TV shows. "Snow White," "Red Riding Hood," and "Mirror Mirror" are a few big screen adaptations.

Now we can add "Jack the Giant Slayer" to the list. It's based, of course, on "Jack and the Beanstalk," which we all remember from childhood, only with a "Buffy" slant. Jack is tasked with slaying the giants in order to save the kingdom from whence he comes. But I'm getting ahead of myself...

Nicholas Hoult, who plays the humble farmhand Jack, is clearly the next big thing. He started out playing the boy in "About a Boy" (remember his sweet version of "Killing Me Softly With His Song"?), and went on to play Hank McCoy/Beast in "X-Men: First Class" (a role he'll reprise in 2014's "X-Men: Days of Future Past"), and the sweet zombie R in "Warm Bodies" last month. 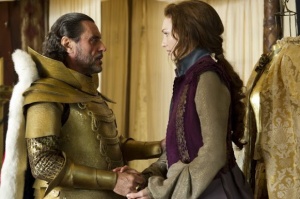 As Jack, Hoult has that same loveably nerdy quality, not unlike his "About a Boy" co-star, Hugh Grant. The story takes place in olden times, and Jack grows up hearing the legend of King Erik, who defeated the giants of Gantua, a land high above in the clouds, between heaven and Earth.

During a visit to the market to sell his mean uncle's horse and cart, Jack defends the honor of Princess Isabelle (lovely Eleanor Tomlinson) who's disguising herself as a commoner to get to know the residents of the kingdom. Jack sells his horse to a desperate monk in exchange for a sack of beans that come with the promise of treasure.

When one of the beans accidentally gets wet, the magical bean sprouts a massive beanstalk that grows to the sky and takes Jack's house and Isabelle with it. Her father the king (Ian McShane) dispatches his head guardian Elmont (Ewan McGregor) to climb the stalk, and Jack -- who's smitten with Isabelle -- volunteers to join the rescue. But the mission is compromised when the king's counselor Roderick (Stanley Tucci) decides to use an ancient, magical crown to rule the giants in the clouds and the kingdom below. 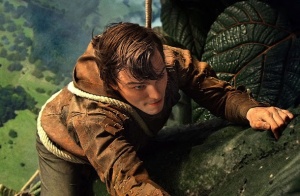 The story is familiar, but ratcheted up several notches with the gorgeous special effects. When that beanstalk grows, it really grows magnificently to the sky. And when it's chopped down, it falls just as magnificently on the kingdom below. The giants are so similar to the trolls in "The Hobbit," you'd think that WETA Workshop was behind them, but not so. Digital Domain and Giant Studios are just a few of the animators and visual effects companies at work here.

There's something for everyone in "Jack the Giant Slayer." Parents will get a kick out of seeing the classic fairytale re-imagined for the new millennium. Girls will like the romance and Isabelle's bravery, and boys will appreciate the gross-out humor like a giant that picks and then eats his own booger. Ewwww...

"Jack the Giant Slayer" is a lot of fun and definitely worth seeing on the big screen -- and in 3D if you don't mind the glasses. It will also be a worthwhile movie to pick up on DVD or blu-ray when it's released later this year, as there surely will be plenty of special features and making-of featurettes.