NJ Kids Movie Review: How To Train Your Dragon 2 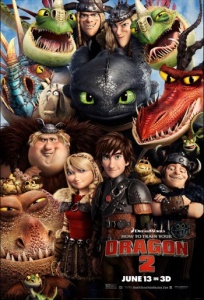 SYNOPSIS: Our beloved friends Hiccup and Toothless are back! In this sequel to the hit 2010 family film, they discover an ice cave that’s home to hundreds of wild dragons and the mysterious Dragon Rider, and find themselves at the center of a battle to protect the peace.

Official Site: How To Train Your Dragon 2

REVIEW: You know how there’s often a missing parent in family movies? “Bambi,” “Cinderella,” “Beauty and the Beast,” “The Lion King,” “Because of Winn-Dixie,” “Finding Nemo,” “Toy Story,” “The Little Mermaid” and even “Star Wars,” “Spider-Man” and “Batman” are just a few movies where either one or both parents are missing. That was also the case for 2010′s “How To Train Your Dragon,” in which young Hiccup is being raised by his dad.

So I was pretty excited when the sequel, “How To Train Your Dragon 2,” not only brought back the missing mom (I’m not giving away any spoilers; she’s right there in the trailer), but also made her a fierce female who’s devoted her life to saving dragons. She’s a regular dragon-whisperer, a trait that also runs strong in her son, Hiccup (Jay Baruchel). Remember, he rescued Toothless in the first movie (ok, after he shot him down, but that’s beside the point).

The story for this second movie picks up five years after the events of the first movie. Now the residents of the island of Berk not only accept dragons, but also keep, train and ride them. As Hiccup says in the opening, “With Vikings on the backs of dragons, the world just got a whole lot bigger!”

Hiccup and his pals are older now, and he and Astrid are a couple. While out exploring new territories one day, the two, along with their dragons Hiccup and Stormfly, encounter a fort covered in ice and a dragon hunter named Eret (Kit Harington), who accuses them of being the “dragon rider” who’s letting his dragon captives go. That’s just the tip of this proverbial iceberg, though. Hiccup and Astrid soon learn that Eret’s boss, Drago (Djimon Hounsou), plans to declare war on Berk and steal all of the island’s dragons.

Meanwhile, that dragon rider? None other than Hiccup’s missing-and-presumed-dead mom Valka (Cate Blanchett). Turns out she’s been just across the water for the past 20 years, hanging out with a huge flock of dragons (is that the right term? flock?), who are all commanded by a protective Borg-like alpha dragon.

It’s up to Hiccup and Team Berk to try and talk some sense into Team Drago’s army, hoping beyond hope that their dragons can resist the pull of the bloodthirsty alpha dragon under the warlord’s control.

Phew! That’s a somewhat complicated (and refreshing, for a change) story for a kids’ movie. Some of the finer details will probably go over the heads of kids, but they’ll love the action and characters they already know from the first movie (not to mention the “Dreamworks Dragons” TV shows based on the movies).

And here’s a little warning that things go a bit dark in the middle of this movie. A main character does not survive, and once you see it, you’ll realize the irony of my giddiness over Hiccup’s mom coming back. Let’s just say, no one is safe, which gives the movie a Game of Thrones-esque quality to it (though it doesn’t in any way approach the severity of the “Red Wedding” episode). And well, Kit Harington is one of the characters, so there’s that.

But somehow, it all works, and “How To Train Your Dragon 2″ is just as much fun for grownups as it is for kids and teens. And it’s just a gorgeous film. Everything that was so awesome about the first movie — beautiful landscapes, crisp animation, great use of 3D (this is one movie you should consider seeing in 3D), strong family and community connections, a compelling storyline, writing that doesn’t talk down to kids, fierce female characters, and the RETURN OF THE MISSING MOM — make “How To Train Your Dragon 2″ a winner. There’s already a third movie in the works, with director Dean DeBlois once again at the helm, scheduled to fly into theaters in 2016.

Like “Toy Story” and “Shrek,” the “Dragon” franchise indeed seems headed for cinematic greatness. I stayed through the end credits thinking there might be a little something for us, but alas, when the movie ends, it ends.

For more reasons why the “Dragon” franchise is great for kids, check out Reel Life With Jane writer Corrine Jacobs’ piece, “5 Things My Kids Love About How To Train Your Dragon.”

Sex/Nudity: Hiccup and Astrid are 20 now and engaged to be married. They hug and kiss a few times. There’s a romantic quadrangle happening with Fishlegs and Snotlout, both competing for the affections of Ruffnut, who only has eyes for Eret. Ruffnut comments throughout the movie about his buff body and wanting to be captured by him (totally unnecessary, in my view). When Hiccup’s mom and dad reunite, there’s an emotional song, dance and kiss.

Violence/Gore: Epic battle scenes between the free dragons and the dragon army might scare young viewers. A major character dies after being attacked by a dragon who’s possessed by an evil alpha dragon. A Viking funeral pyre, where the body is sent out to sea on a ship ablaze with fire, is emotional to watch.

Profanity: A few insults like “useless,” “coward” and “moron.”

Which Kids Will Like It? Kids 7 and older who liked the first movie or the TV series.

Will Parents Like It? Grownups will like this movie as much as young viewers. There are some good messages about family, bravery, and protecting people you love.