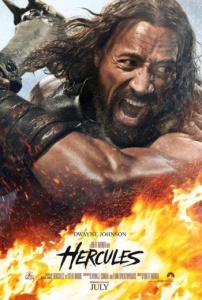 SYNOPSIS: Dwayne “The Rock” Johnson dons sword and sandals for Brett Ratner’s version of “Hercules,” the Greek demigod whose special skills are tested when the King of Thrace and his daughter request help in defeating a tyrannical warlord.

REVIEW: I’m thinking that Hollywood should just take a nice long break from sword and sandals movies. The recent crop in the past few years are all the same — formulaic dialogue, predictable stories, and vast, mind-numbing amounts of battle scenes. “Hercules” is no different. And they came SO close on the language issues. Filmmakers, just because you’re allowed to have an F-Bomb in a PG-13 movie doesn’t mean you have to throw one in there. Argh.

Based on the Radical comic “Hercules: The Thracian Wars” by Steve Moore, this movie skips the mythology of the character as a demigod and instead focuses on his status as a legendary warrior. Dwayne “The Rock” Johnson — whom I love and is the main reason this movie gets any props from me — plays the muscular character as a sword-for-hire mercenary with a team of skilled fighters: best friend, Autolycus (Rufus Sewell); seer Amphiaraus (Ian McShane); Amazon Atalanta (Ingrid Bolso Berdal); mute but deadly Tydeus (Aksel Hennie); and Hercules’ young nephew, Iolaus (Reece Ritchie), whose main role is storyteller.

When the gorgeous Ergenia (Rebecca Ferguson) asks for Hercules’ help to defeat a demonic enemy of her father, Lord Cotys (John Hurt), Hercules agrees. But he’s gotten a bad rap as the person who killed his wife and children, and he needs to suss out the truth of what happened the night they were murdered. In short, he’s a warrior with some baggage.

Look, Dwayne Johnson was born to play Hercules. He’s buff and charming, and his ability to blend those traits has turned him into one of Hollywood’s most sought-after action stars. Here, he plays the role of Hercules a bit darker than most of his roles, but he’s still likeable and you’re rooting for him to succeed at whatever task is put before him (especially clearing his name). He, along with Ian McShane, Rufus Sewell, John Hurt and Ingrid Bolso Berdal as a fierce female warrior are the main reasons to see this movie.

The action sequences, while impressive and entertaining (those warriors have some really interesting fighting techniques), are somewhat overwhelming after a while. We’ll call it battle fatigue. For the next movie about ancient warriors, I’d like to see less action sequences. I know that goes against the grain, but there you have it.

Plus, I feel like the filmmakers spend so much time on the action and fight scenes that they forget to flesh out the dialogue, which in this movie is formulaic with a side order of cheese. And there’s that aforementioned F-bomb. Did they even know what that word meant back then?

If you’re a fan of this genre — action movies about ancient gods — then you might like “Hercules.” Otherwise, you could probably wait to see it for free on cable.

Sex/Nudity: Flashbacks show Hercules’ wife kissing him and disrobing (her body is shown nude from the back). A few innuendos involving swords and tongues.

Violence/Gore: The body count is super-high, thanks to massive amounts of battle scenes. People die via spears, arrows, knives, scythes, fire, wolves and falling structures. Scenes show Hercules defeating a lion, boar and hydra. A young boy’s life is in peril, a woman is nearly beheaded, and a family is killed by hungry wolves.

Which Kids Will Like It? Kids 14 and older who like action movies with lots of battle scenes.

Will Grownups Like It? Skip this one until you can watch it for free on cable.