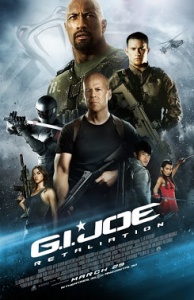 SYNOPSIS: When a brutal surprise attack takes out most of the G.I. Joes, they realize they're not only fighting their mortal enemy Cobra; they're also dealing with threats inside the White House that jeopardize their very existence.

MPAA Rating: PG-13 for intense sequences of combat violence and martial arts action throughout, and for brief sensuality and language

Sex/Nudity: Mild flirting. A sexy female team member dresses in skimpy clothes to distract men and get necessary information. She also undresses while a member of her team tries not to look. Guys wear tight t-shirts and fight shirtless in various scenes.

Violence/Gore: Tons of fighting, punching, chase scenes, explosions, gunfire and heavy artillery, including tanks and other warfare equipment. The city of London is destroyed in one brief scene. The body count is high, including a few major characters, but we don't see anyone up close, and no blood is shown.

Which Kids Will Like It? Kids 14 and older who like movies with lots of action and explosions. This movie is ok for teens, but too violent for younger kids who might be playing with the G.I. Joe toys.

Will Parents Like It? It's a fun movie for what it is -- a flimsy plot wrapped around handsome people working together to save the world.

REVIEW: Remember that scene in "Terminator 2: Judgment Day" where Sarah and John Connor and their cyborg protector travel to the desert where they're taken in by her renegade pals? Remember the underground bunker where all the weapons and artillery were kept? Remember how awesome that scene was when they opened the door, ventured down into the dusty underground area, and saw all the weapons?

There's a scene like that in "G.I. Joe: Retaliation," only it's not nearly as awesome. In "Joe," the scene involves three team members who seek out General Joe Colton (Bruce Willis), now living a quiet life in suburbia. When he realizes the scope of their problem (hang on, I'll get to that), he starts opening closet doors, fake walls, kitchen drawers, etc., all of which house vast amounts of high-powered assault weapons.

Every time I see a scene like that, my mind immediately goes to all the school shootings, theater shootings, college campus shootings (the list, sadly, goes on), and I wonder if the allure of these types of movie scenes is wearing off. The weapons aren't impressive. They're just sad and scary. And there's a ton of gun violence in this movie, although there's no blood or gore, which I guess makes it a better fit for teens than the previous movie, "G.I. Joe: The Rise of Cobra."

The movie begins with the G.I. Joes -- led by Duke (Channing Tatum) -- on a mission to Pakistan. They quickly learn they've been set up, however, and only Roadblock (Dwayne Johnson), Jaye (Adrianne Palicki), and Flint (D.J. Cotrona) survive a brutal surprise attack.

Looking to avenge their fallen comrades, the surviving Joes learn that the evil plot goes all the way up to the president of the United States (Jonathan Pryce). Turns out, it's not actually the president, after all. Thanks to some nifty nanotechnology, the real president is being held hostage while a lookalike is running the free world. The nefarious organization Cobra is controlling the White House and aims to take over the world with a terrifying new weapon.

The Joes -- with help from old friends (the aforementioned General Colton), old enemies and new allies -- must join forces to save the world.

Let's get real here. It's a flimsy plot that's been done hundreds of times on the big screen. But we don't go to movies like "G.I. Joe: Retaliation" for the plot anyway, do we? We go for the high action, explosive scenes, and handsome people in t-shirts three sizes too small (that includes both men and women). The movie knows that. We know that. No one's fooling anyone here.

I'm bummed that Channing Tatum is only in the movie for the first few minutes, because 1) he's really nice to look at; and 2) he and Dwayne Johnson have some funny scenes with snappy banter. Maybe they'll figure out a way to revive him for the next "G.I. Joe" movie.

And even though I lamented General Colton's massive gun collection earlier, there's something comforting about seeing Bruce Willis take out a few bad guys. It's like sitting in your mom's house eating ice cream. It's like a little bubble where all is right with the world.

This movie also manages to include a bunch of current events and pop culture references: Fox News, North Korea, global warming, James Carville, cool martial arts scenes (including one on the side of a cliff), slo-mo shots of guys walking away from explosions, and cute lightning bug drones that will take your head off if you're in the wrong place at the wrong time.