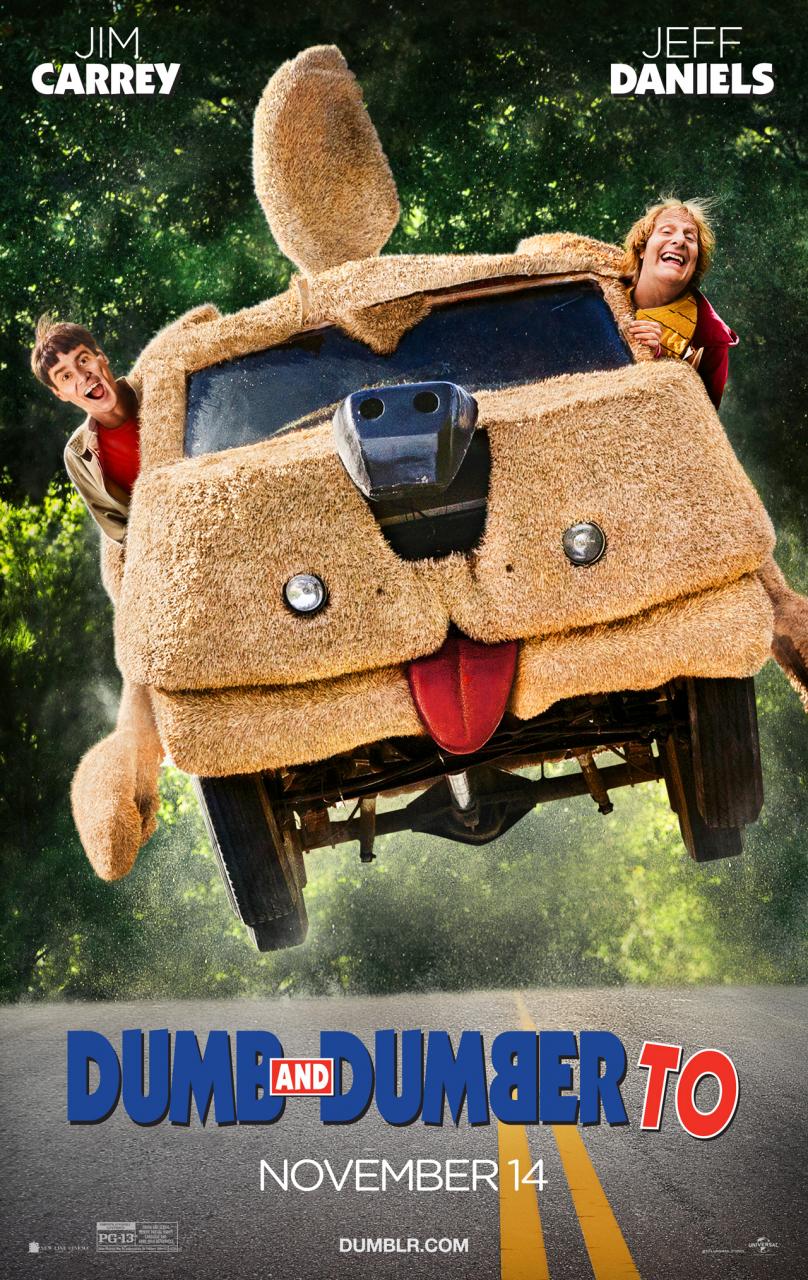 SYNOPSIS: It’s been 20 years since their first adventure, and now Lloyd and Harry embark on a road trip to find Harry’s newly discovered daughter, who was given up for adoption.

REVIEW: At first, I thought maybe it was just me who wasn’t finding “Dumb and Dumber To” all that funny. After all, I’m not really a fan of crude humor, of which there is plenty in this movie. But then I realized no one else in the theater was laughing either. It just isn’t that funny. Which is sad, because we can all use a good laugh about now, right?

It’s been 20 years since Harry (Jeff Daniels) and Lloyd (Jim Carrey) first appeared on the big screen, and not much has happened during that time. Lloyd has been living in an assisted living facility, while his best friend Harry — the most devoted and loyal friend in the world — has been coming to see him every week.

But Harry is in need of a new kidney, and about to give up the ghost because he has no biological relatives. Until, that is, he discovers an old postcard with a note written by a woman he may have gotten pregnant many years ago. He and Lloyd track down the woman, Fraida Felcher (Kathleen Turner – yes, Kathleen Turner!), who reveals that she gave the baby up for adoption.

Thus sets off a chain of events that puts Harry and Lloyd on the road to find this girl, named Penny (Rachel Melvin). Turns out her adoptive parents are super rich, and her dad is a big-shot scientist who has sent Penny to a convention to accept an award for him.

It’s a comedy of errors as Harry and Lloyd follow Penny to the convention, where Harry is mistaken for her biological dad and asked to judge a young inventor’s panel.

Here’s the good thing about “Dumb and Dumber To”: there’s still plenty of chemistry between Jim Carrey and Jeff Daniels, and the two seasoned actors play well off each other. You can’t help but smile when they get on a bicycle together and pedal down the road like they’re ten years old.

Fans of the original movie might get a kick out of this one (though not in the theater where I saw it), but the script is filled with tired gags, an uninspired plot, and plenty of crude humor, including fart jokes, “funky” hand jokes, and other gags that just aren’t very funny.

Sorry, Jim and Jeff. I love you guys and really wanted to love this movie. Maybe a new franchise is in order?

Sex/Nudity: Lots of innuendos and sexual references. Lloyd inadvertently pleasures an elderly woman with his hand. Flashback scenes hint at characters’ sexual history. A couple is shown about to have sex in a van. Some kissing and foreplay activities. A woman is cheating on her husband.

Violence/Gore: A character is shot, and some blood is shown. A trained sniper shoots at two characters. Elaborate pranks include explosions, an unnecessary surgery, and pushing and shoving. Some cruelty to animals. A character is killed by a train (which is played for laughs). Dream sequences include death scenes. A flashback includes a car rolling end over end. Plenty of slapstick humor, pratfalls, etc.

Which Kids Will Like It? Kids 15 and older who liked the first “Dumb and Dumber” movie.

Will Grownups Like It? “Dumb and Dumber To” lives up to its title. It’s dumb and just not that funny.

Images in this review used courtesy of Universal Pictures.