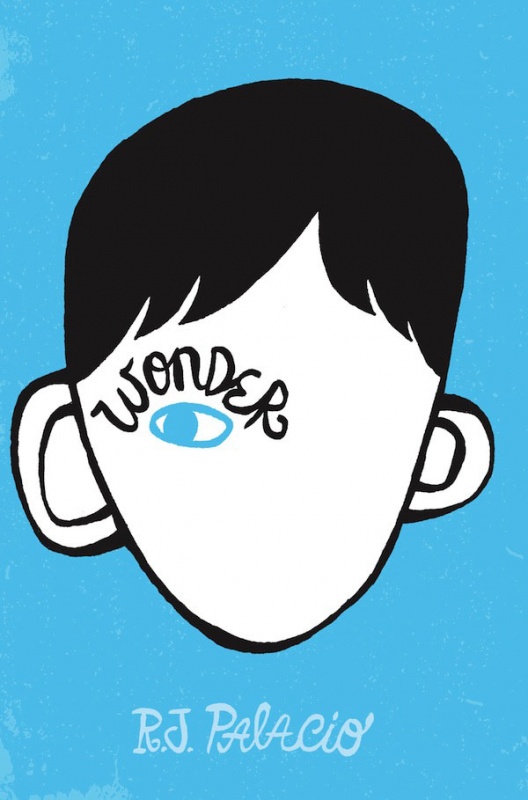 When I saw my two older children literally have a tug of war battle over a book, I knew precisely how to settle the argument.  That much desperation could only mean one thing, so I quickly took the book and settled onto the couch, and flipped to Page One.  It was the best decision I’ve made in a long time.

'Wonder', written by R.J. Palacio, is the unforgiving, unforgettable story of August Pullman.  Auggie, as he is called, is a normal 10-year-old boy in so many ways – he loves Star Wars and Xbox and enjoys spending time with his friends. But he is anything but normal, suffering from a rare genetic mutation that has left his face horribly deformed. Although we never get a precise description of Auggie, we learn in snippets that, despite twenty-seven surgeries, his ears lack outer rims and rest low on his face, his head is long and misshapen, his checks are concave, his mouth droops and he has only recently learned not drool.  Yet, Auggie strives, as so many young people his age do, to be ordinary.   He just wants to fit in. All his life he has endured gasps, forced smiles, stares and whispered remarks from strangers (he employed an astronaut’s helmet for 2 years to keep himself covered) but now, as he enters middle school at Beecher Prep – the first school he has ever attended – his yearns to be accepted, and his loneliness and isolation is sadly magnified.  Who doesn’t remember the ferocious ‘eat or be eaten’ Middle School mentality – so it’s of no great shock that few students want to be associated with Auggie, lest they ruin their own reputation – and worse still, there are those who seek to bolster their own social standing by subtle bullying.   And, as so often is the case for tweens and teens, it’s easier to join the group laughing than to stand up for justice alone.

Auggie pretends not to care, but of course, he hears the snickers and laughs and callous comments, and as the story unfolds, told in the first person, first by Auggie, and then by his sister and his few friends, we learn how he and his family have faced adversity with laughter and love and how prevalent even inadvertent discrimination is.  ‘Wonder’ forces us to acknowledge such heartlessness and destruction – and to face our own insecurities about those who are different.   But it also allows us to find traces of humanity and empathy.   In a world where we are repeatedly reminded about the insidiousness of bullies, we so rarely hear about the few strong and confident young men and women who stand up for what is right.  And, thankfully, even as Auggie quietly endures the hatred and stupidity of a powerful few, we meet Summer and Jack, two students who befriend Auggie.  Indeed, they are ostracized and are relegated to a table for three in the lunchroom, but they realize, unlike so many others, that it doesn’t matter how many friends you have or how high you rank in popularity, it’s the sort of person you are that really matters.

I’m not ashamed to say that there were several times throughout the book that I teared up.  It’s that strange sort of novel – written for tweens and young teens, but equally enjoyable – and powerful – for adults.  And if you ask me, this should be required reading for any young child on the cusp of middle school.  They should all meet Auggie – everyone should learn to look beyond his physical deformities and remember that beauty is only skin deep. It’s what’s on the inside that matters.