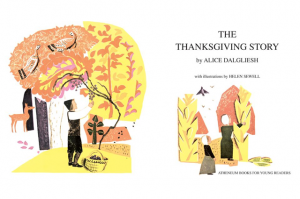 Often times, historical fiction children’s books tend to dumb down the content and history into a dry, uninteresting over-simplified synopsis.  The Thanksgiving Story by Alice Dalgliesh is a rare find – an educational tale of the Mayflower sailing and the first thanksgiving in Plymouth that is neither superficial nor stale, and truly engages the young reader.

The story follows the Hopkins family as they set off from England to America.  They are among a group of 102 men women and children aboard the Mayflower – after a quick Google search, I learned they were in fact real passengers on the Mayflower.   I was immediately hooked – this family of five were real, breathing people who endured incredible hardship as they made the transatlantic voyage in search of religious freedom and a new life. They must have had tremendous fear as they set sail for an unknown land, yet the Hopkins children, Giles, Constance and Damaris were sure it was a great adventure.  Still, “many people were seasick. Other were sick because they did not have fresh fruit and vegetables to eat.” There was a violent storm, and many people died.  Yet, even among such misery, the Hopkins welcomes another member, a baby boy they aptly named Oceanus.

The pilgrims believed they were headed to Virginia, but instead landed in Massachusetts.  Of course, I learned all about this landing years ago in school, yet reading the book was like being a first person witness to the first time they saw the towering evergreen trees, the thrill of the women who were able to wash their clothes for the first time in months, the hunt for corn, the fear of coming face to face with Indians.  I knew about Squanto and the first thanksgiving feast, but I admit I did not truly know they didn’t land at Plymouth, but sailed there after first making their initial landing elsewhere in Massachusetts, and they chose it because they had left from Plymouth England; that the Indian chief who visited the pilgrims was named Massasoit; and that only 51 settlers survived that first winter.

These facts are told simply and beautifully in The Thanksgiving Story – it is history that reads like a fiction, and as a result the lessons are even more powerful.  The illustrations, by Helen Sewell, are similarly beautiful, full of seasonal colors, highlighting the changing months and the rebirth of the settlers. There is also a terrific, although perhaps too small, sketch of the Mayflower, with an interior view of the boat that is labeled, so, as readers learn about the ‘hold’ and the ‘tween decks’ and ‘Gun Room’, they can refer to the illustration and understand how the ship was laid out – and how truly overcrowded the conditions were.

The Thanksgiving Story is a Caldecott Honor book, and indeed is a wonderful story to share as we head into Thanksgiving week.