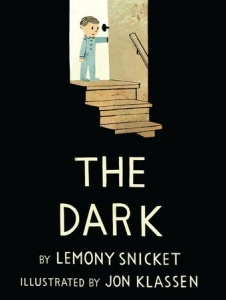 Both my older children gobbled up the series, ‘A Series of Unfortunate Events’ by the mysterious Lemony Snicket, which follows the three orphaned Baudelaire children as they are shuttled to live with Count Olaf, a distant uncle, after their parents death in a fire – so when I discovered ‘The Dark’ a picture book by the same author, I was intrigued.  The summary states it is geared to children ages 3-7 so I assumed ‘The Dark’ would be the perfect entry to the wonderful writing of Mr. Snicket for my youngest. How wrong I was.

'The Dark' tells the tale of Laszlo who is afraid of the dark.  The dark lives in the house, lurking in somewhat sinister places, like behind the shower curtain, in closets, and, of course, in the basement. Lazlo sees the dark, but he has thus far succeeded in keeping the dark out of his room.   Until one night.  That fateful night, the dark comes into his room and with a creaky, far off voice, the dark tells Laszlo to come with him, that he has something to show him.  Past the shower curtain Laszlo and the dark go. Past the closet.  Down the stairs, to the basement until they are standing in front of a dresser.   And then there is a whole explanation about the dark - yes it is everywhere inside the house, but why bother being scared of it because without a roof, the rain would fall on your head, without a closet you'd have no place to put your shoes, without stairs you'd have no way to get downstairs. Then the dark orders Laszlo to open the bottom drawer. Laszlo does and lo and behold there is a stash of nightlights.  Lazlo brings it back to his room, and from them on out, he’s no longer afraid.

So do our young readers learn a good lesson – that there's no need to be afraid of the dark?  I wish that were the case, but in my opinion, the lesson falls short. The illustrations by Jon Klasses are simple yet quite suggestive of Laszlo’s – and really many younger children’s - underlying fear of the dark.  The pictures and story do little to assuage this fear, but rather accentuate it.  Snicket reminds us that the dark is everywhere; he even gives it a mind and a voice – and the power to whisk you away.

Sure, Laszlo ends up with a nightlight, and, sure, Snicket ultimately explains that the places where the dark lurks are ordinary, useful nooks and crannies.  But personally, in the mind of the young readers – and even older children - this wouldn’t do much to erase normal childhood fears.  I wouldn’t want to hear the dark talk to me.  I wouldn’t want the dark to take me out of my bed and down into a dark basement.  It was a bit unnerving to me.  I can’t imagine what a child would think.

My recommendation – The lesson is a good one, but it falls short and could quite possibly scare some younger children