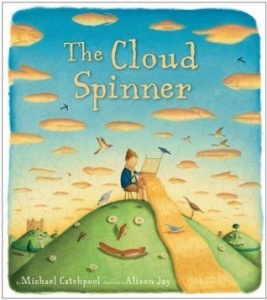 I tend to be one of those mothers – the sort who constantly finds lessons in every day happenings. I stop at roadside markers so we can learn about history, and I always have my phone handy just in case we come upon a new idea or concept and I will then quickly Google it and give a full explanation.

The kids, of course, have perfected the eye rolls and sighs (and my husband tends to speed up if he spots a brown historical marker, then coyly says, “Oh, I’m sorry, I didn’t see it” as we whiz past).  So I love when I stumble upon a book that is not only a good read, but also has a subtle, but powerful, moral or educational lesson. The Cloud Spinner, written by Michael Catchpool and illustrated by Alison Jay, is one of those books - a true pleasure to read: a poetic, simple narrative complimented by beautifully illustrated pictures.

It begins, ‘There once was a little boy who could weave cloth from the clouds’, and we learn that this young boy has a spinning wheel and loom and sits on top of a hill, spinning the clouds into thread.  There’s gold in the morning with the rising sun, white in the mid-day sun, and crimson with the setting sun in the late afternoon.  As he works, he sings, “Enough is enough and not one stitch more’ and he uses only enough clouds and threads to make himself a single hat and a single scarf – one to keep the sun off his head during the hot summer, one to keep him warm during the cold winter.

Then one day, as the young boy walks through the market wearing his scarf, a big, fat king on a big, fat horse rides into town. The king notices the beautiful scarf and demands that the young boy weave him one – and not just an ordinary one, but a longer one, “much longer, for I am the King!” The young boy, realizing the king most certainly doesn’t need one – much less a long, long one – momentarily protests, trying to explain that it is not wise to use so much of this particular cloth, but of course, the greedy king doesn’t listen and orders the boy to make the scarf.

The King is thrilled with the finished scarf – but, of course, that is never enough for this greedy ruler – and now demands the young boy to make him a cloak – and dresses for his wife, the queen, and his daughter, the princess.  Again the young boy tries to explain that this is not wise, but again, the king shouts, “I want those clothes and I order you to make them!”

So again the young boy returns to the hill and spins the clouds into threads, and as he does, there are fewer and fewer clouds up in the sky, until there is not a single cloud remaining.    The clothes delight the king, who is blind to what he has done.  Even when villagers complain to the king that their animals are thirsty and the crops are all dying, the King seems oblivious to what his greediness has done to those around him.

Thankfully, his daughter is all too aware and that night, climbs up the hill and returns all the clothes to the young boy.

“Is it too late to undo what has been done”, she asks and the boy simply smiles and promises, "There is still time.” And as he unwinds the threads, the cloud sail back up into the sky and rain falls down onto the parched ground, and beneath a full rainbow, the princess sings, “Enough is a enough and not one stitch more.”

A simple lesson about using our resources wisely. Hopefully the kids will catch on to this - but even if they don’t, The Cloud Spinner is a tale that reads like a fable and is heartbreakingly beautiful.  Besides, you can always tell them about the lesson and then get out your phone and Google environmental conservation.

A beautiful, must read (with a good lesson to boot!)