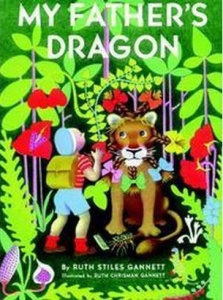 One of the most charming early chapter books, without a doubt, is My Father’s Dragon.  I actually have a vague recollection of reading it with my mom when I was a child – and I have just finished re-reading it now with my youngest – and we both loved it now as much as I did when I was younger.

My Father’s Dragon, by Ruth Stiles Gannett, is actually the first in the trilogy and introduces us to 9 year Elmer Elevator, a young boy who finds a cat one wet day – a cat who was “very drippy and uncomfortable” – and invites the cat to come home with him. “I’d be very much obliged if I could sit by a warm furnace and perhaps have a saucer of milk,” the cat responds.  There doesn’t seem anything out of the ordinary that Elmer talks to the cat, or that the cat talks back.  Unfortunately, Elmer’s mother is less inclined to take in the cat, and soon she throws the cat out.  Elmer is saddened by this, and when, one day, Elmer and the cat are taking a walk in the park and the cat tells him about a baby dragon that has fallen out of the sky on Wild Island and is now being held prisoner by the animals inhabiting the island, Elmer decides immediately that, since he is still mad at him mom, he shall run away and rescue the dragon.

And so he does, taking with him a knapsack filled with “chewing gum, two dozen pink lollipops, a package of rubber bands, black rubber boots, a compass, a toothbrush and a tube of tooth paste, six magnifying glasses, a very sharp jackknife, a comb and a hair brush, (and) seven hair ribbons of different colors…” It seems an odd assortment of items, yet all perfectly reasonable. Soon, with the help of the cat, Elmer is stowed away on a ship that brings him to the Island of Tangerina.  After collecting as many tangerines as his knapsack can hold, Elmer crosses a rocky bridge, and he is finally on Wild Island.

The adventure to reach the dragon is endearingly comical.  Elmer meets many animals along the way – wild boars, turtles, tigers, a rhino, a lion,  crocodiles.  Each wants to eat him, but quickly Elmer finds a way to get away (and here the items in his knapsack don’t seem to happenstance after all!) – the rhino is sad that his tusk is dirty, so Elmer gives him the toothbrush and toothpaste and escapes unnoticed as soon as the rhino begins brushing; the lions mane is horribly tangled, so Elmer gives him the comb, brush and hair ribbons and while the lion begins to primp, Elmer slips away; the crocodiles won’t cooperate by making a bridge across a river, so Elmer tricks them into lining up by tying the pink lollipops to each tail.

Elmer is deliciously ingenious – and wonderfully persistent - and finally he manages to cross Wild Island and, with the help of his sharp jack knife, cuts the dragon free. Together they lift off, away from the island – and head back home.

The blank and white illustrations by Ruth Chrisman Gannett accentuate the whimsical nature of My Father’s Dragon.  What can be more charming than a circle of seven tigers chewing gum or a six monkeys holding magnifying glasses (they were used to look for fleas on their gorilla friend). It is sweetly engaging – a simple book that beckons a simpler time: a time of innocence when children wanted to ride on the back of a dragon and believed they could talk to animals.  Why wouldn’t’ Elmer Elevator rush off to save the dragon?  Why wouldn’t he bring with him gum, and lollipops and hair ribbon? It was just what he needed – and My Father’s Dragon is just the story all youngster need to read.