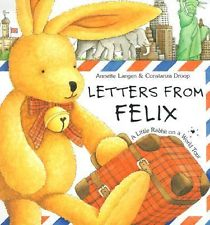 My middle child, Sophie, has a stuffed friend she got when she was 18 months old – a cute puppy from Hershey Park.  She could barely walk, but somehow toddled over to this particular souvenir, picked him up by the ear and proclaimed his name was Woofy. He has barely left her side since. Now, almost 9 years later, Woofy, remains her most trusted friend.

For any parent with a child similarly attached to a stuffed animal, Letters From Felix: A Little Rabbit on a World Tour written by Annette Langen and illustrated by Constanza Droop is a perfect story.  It is both a touchingly beautiful story of the deep friendship between a young girl, ironically named Sophie, and her beloved stuffed rabbit, Felix – and an exciting and often humorous tale about what happens when Felix goes missing.

Sophie and Felix are best friends – they had known each other forever  - but one day, the unthinkable happens: on the way home from a family summer vacation, Sophie and Felix are separated and despite the family looking all over the airport, when it is time to board their plane, Felix is still no where to be found.  Sophie is devastated.

Back at home, school begins again, but things could never possibly be the same again without Felix waiting for Sophie at the end of the day. But then, one day, there is a letter waiting for Sophie, with her name and address written in “squiggly scrawl”. (And in the book, it is actually a letter that kids can literally take out of an enveloped glued to the page). It is a letter from Felix.  He is in London – he describes a square castle, with men outside standing in funny hats, a filthy river, people who talk differently. It is signed, “ I will write soon. I miss you. Yours Truly, Felix.”

Sophie is ecstatic and immediately shows the letter to her brothers and sister.  She wants to know about this strange place where Felix is and together with her dad looks up London in an encyclopedia.  They read, “Capital of Great Britain and Northern Ireland, lying on both sides of the Thames River, population almost seven million.”  That night, Sophie is happy for once as she falls asleep.

A few days later, another letter arrives, this time from Paris, and then, as the weeks pass, more letters arrive – from Rome, and Egypt, and Africa.  With each letter, Sophie and her family (and we, the readers) learn about different parts of the world through the Rabbit’s amusing narratives. With each letter, Sophie feels more and more comfortable knowing that Felix is enjoying his world travels, and believes that one day soon he will be home.  In his last letter, from NYC, he indeed promises to return by Christmas.

More good news – Aunt Edna arrives a few days before Christmas, bearing gifts from her world travels.  What a great holiday it will be.  But by Christmas Eve, Sophie is unsure. Where is Felix?  Suddenly there is a knock at the door. Sophie answers the door – she "looks to the left and the right and then at the doormat. She can’t believe her eyes, because there – yes truly – there stands Felix, with a small suitcase."

He has returned.  And with the innocence of small children, she doesn’t even question how he went around the world, or how he returned home. He is back, safe, with Sophie, and that’s all that matters.

Letters From Felix is a delightful story, one that captures the imagination of both young and old.  You can’t help but cheer for this little stuffed rabbit as he travels about the world and back to his best friend.  The letters, indeed written in a scrawl, are fun and educational (there are also snapshots in each envelope of the rabbit in front of a famous landmark).  What can be better than to be entertained and educated in one book?

It still remains our biggest worry that my daughter’s Woofy will one day disappear – but Letter from Felix quickly became one of our favorites, and after reading it together, we often wonder where Woofy would go on his world travels.

Letters From Felix: A Little Rabbit on a World Tour

Published by Book Club of America