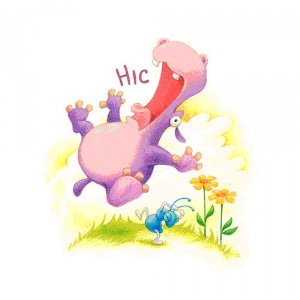 When it comes to children’s literature, I find there are generally two types of silly books – the forced, make-me-cringe silly books that all too often have references to body parts and bodily function, and the deliciously, ear-to-ear grin silly books that combine a just right silly storyline with whimsical narration and illustrations. Hiccupotamus written and illustrated by Aaron Zenz is, thankfully, one of the latter.

Just to set the record straight, silly books aren’t supposed to have any great message or really any in-depth plot.  But they are the perfect books to share with your children and are bound to get you laughing.  Zenz has accomplished that in his adorably sweet picture book of a poor hippo that has the hiccups.  His rhyming verse will have readers tongue tied – “There was a hippopotamus who hiccupped quite-a-lotamus and every time he got’emus, he’d fall upon his bottomus.  Now, the poor hippo doesn’t mean to create havoc, but havoc he does create when, one day, he comes upon an elephant holding two handfuls of cakes, but just as he is about to say “hellophant” - “HIC”!  The cakes go flying (landing, of course, all over the elephant), and off he runs, with the elephant in pursuit, only to trip over an elephantipede (soon covered in cake as well), who joins the chase, where all three crash into a “rhinoceros with minty dental flosserous,” leaving them tied in knots (hippos three victims are pictured hanging from the trees). "And that was the last strawcerous.” Together, the gang sets off to find the cure for Hippos hiccups: “They wrapped him in licorice and spun him around very quickerish. They secured him to a buffalo and made him huff and puffalo.” (But still he hiccups). “They acquired an aquarium and flash him something scaryum. They poured him tubs of vinegar and tickled his chiny-chin-chinigar.” And suddenly…. the hiccups are gone.

Until…. HIC!  There goes the elephant and centipede and rhino hiccupping away!

Is the book silly?  Yes!  But is it fun? You bet. And it’s a story that young kids will love, most especially, the made-up-word rhyming text, aka Dr. Seuss.  The colored pencil pictures are equally wonderful as well – (how could you not love the three animals tangled together with a string as they pour over books titled ‘antidotes’ and ‘fix hics’.  One word of caution: Hiccupotamus is bound to produce a case of the sillies, so avoid at bedtime!

Written and Illustrated by Aaron Zenz