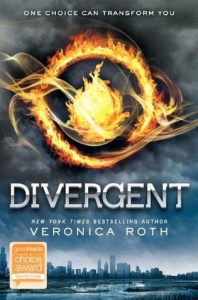 It’s hard not to be at least mildly intrigued by a book that shoots to the top of the bestsellers’ list; couple that with Hollywood casting A-list stars to the movie version, and now my interest is piqued. Add in word of mouth that this new book is the next best Hunger Games - well, as soon as my son put the book down, I grabbed it and started reading.

Sadly, Divergent, written by Veronica Roth, is no Hunger Games.  Certainly, there are similarities.  Both books employ a female teenage protagonist – here, in Divergent, she is Beatrice Prior, known as Tris.  And both heroines live in a dystopian society set sometime in the future.    In Hunger Games, the nation of Panem is divided up into 12 Districts and a deadly survivor sort of competition ensues between 2 young members of each district; in Divergent, a devastated Chicago is divided into 5 Factions: Candor (the honest), Abnegation (the selfless), Dauntless (the brave), Amity (the peaceful), and Erudite (the intelligent), and 16-year old members of each faction must decide what Faction in which they wish to live.  In both books, the main characters, mere children (and I truly believe even teenagers are children) are saddled with immense responsibilities and basically need to figure out how to save themselves and the world around them.

So, you’d think I would like Divergent, yet I found it frustratingly unsatisfying. The characters, most especially Tris, are paper-thin and there is very little to make me want to root for her. And while Roth has created a fascinating premise – the idea that society is segregated into likeminded people is really a case study of humanity:  does grouping people who share similar beliefs and traits avoid future confrontations or, as each Faction is simply a piece of the whole, will it inevitably ignite a desire for one Faction to attempt to dominate others (don’t we all have competing voices in our head and ultimately one wins out?).  As expected, the latter turns out to be true, but it falls far short of creating a real compelling metaphor about segregation.  (I need to note that I may have been reading too much into any metaphor or political statement by Roth, as many reviewers simply state the book explores a young girl who leaves her family on a quest for independence, but personally I saw this broader meaning).

In any event, a great part of the backstory is never developed, and readers are never truly given a reason for how or why society crumbled; you’re supposed to simply accept it.  And so the novel begins, and we learn that all 16-years old must undergo a compulsory test to determine which Faction they will be assigned to.  Enter Tris, an unlikely heroine – she is neither overly pretty nor overly strong. She was born into Abnegation, but knows she doesn’t entirely belong.  The results of her test are ambiguous, and she is told confidently that she is Divergent but to never share this information; ultimately Tris chooses Dauntless over staying with her family.  After undergoing an initiation period where she learns how to be a true Dauntless (exercises include jumping off of moving trains, mercilessly fighting other initiates, and climbing to the top of a dilapidated Ferris Wheel), she, of course, becomes the toughest, most celebrated initiate. And, of course, along the way, she falls in love (she is also romanced by a second young man, but Tris gently rebuffs him, and he commits suicide), and learns that the Erudite Faction is stirring up trouble, and plans an attack.  It’s Tris to the rescue, along with a handful of other good guys.

Tris is able to stop the current uprising, but its obvious (as with so many bestsellers) that there would be a sequel (it’s already been published) and the third is due out soon. Of course, I have to remember that Divergent is a young adult novel and maybe I’m missing something since it’s hugely popular with teenage readers. But the truth is nothing in Divergent seemed particularly believable.  Neither the characters nor the events are flushed out, and almost as soon as Tris realizes that she will need to stop the impending war, we are in the middle of a battle and she is off killing and trying not to be killed.  She meets up with her brother, mother and father, but just as quickly, her mom and dad are shot dead.  You’d think I care what happened and root for Tris to win, but I really didn’t.  The action happened quickly, and was over just as quickly, before I could become emotionally attached.

Sadly, it’s no Hunger Games – and maybe that was my problem. If I didn't go in comparing it to that series, maybe I would have liked it more.  But I’m not the only one making that comparison, so if we’re going to be honest about it, stick with Katniss, Peeta and Gale, and the original dystopian society.