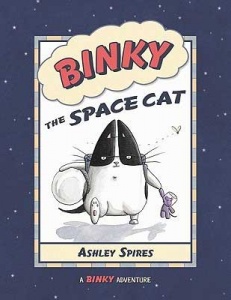 Lately, on library day, my daughter has been bringing home graphic novels.  I knew they were all the rage right now (at least in her class) but other than The Invention of Hugo Cabret, I really wasn’t sure what they were all about and was sort of thinking she was reading a comic.  So I finally picked one up and took a look. I was pleasantly surprised.

Binky The Space Cat by Ashley Spires is no ordinary comic book.  Yes, there are pictures with captions, but unlike a comic strip where there is no real end since they are progressive stories (do children nowadays really have any concept of the Sunday morning strips?), Binky the Space Cat has a beginning, middle and end – and delightfully so - telling the story of Binky, his human family and an almost space odyssey.

Binky lives with “one big human and one small human”. They have a wonderful relationship:  he massages them lovingly (he does forget to retract his claws); greets them at the door (he’s always underfoot), and sings them to sleep (perhaps his purring is a bit too loud). He also protects them from “aliens” – which in the human world are actually flying insects.  One day, Binky, who has dreamed of space travel, finds a note at the bottom of his cat food – “Want to stop aliens? Then become a Space Cat today!!!” – and suddenly he has a purpose.  Binky knows he needs to sign up.  He’s ready to head into Outer Space (even though he’s never been outside).  When his secret acceptance letter arrives, he immediately begins training and studying; he even builds his own space ship.  Soon, he’s got on his space helmet and packed his snacks, planet guide, alien fighting gloves and his zero gravity kitty litter.  But there’s something missing:  his humans.  How could he blast off and leave his friends?

After reading Binky the Space Cat, my daughter read it to me again that night.  I was amazed how enthralled she was by the story; the lack of words didn’t matter. She was able to capture the tone and style of the story because the pictures illustrated so much. We both loved the story (it reminded us a little of Skippy Jon Jones simply because the story was told from the cat’s point of view and was silly but funny) and together we decided Binky made the right decision to stay with the ones he loved.

Yes, a graphic novel may not be a typical book –but that doesn’t mean it’s not a worthwhile read – and a great choice for children.  They get to use their imaginations and to really use their minds to connect text and pictures. I am sold on graphic novels.

Written and Illustrated by: Ashley Spires