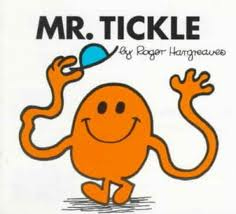 I admit I’m a bit late to the Mr. Men and Little Miss series – sure, I’d seen the faces on t-shirts and vaguely heard about the characters with names like Mr. Fussy and Miss Tiny - but, the truth is, even after receiving a half dozen of these books as a gift for my youngest a couple of years ago, they remained on her bookshelf, unread. Until recently, when my daughter pulled out Mr. Tickle, and together we discovered the wonderful world of Mr. Men and Little Miss.

Mr. Tickle, written by the late Roger Hargreaves, is a pumpkin orange colored round body with long, stretchy arms (Mr. Tickle was supposedly created when his young son, Adam – who now writes and illustrates the books - asked his father what a tickle looked like).  Mr. Tickle has a permanently cheerful grin and fills his days tickling people around town. He first tickles a teacher by stretching his enormously long arms through a window, then moves on to the postman (who drops his letters in a puddle) a green grocer (a pile of apples go rolling across the floor) and a station master (the trains are all delayed because of the mayhem). Finally, Mr. Tickle heads home to bed, but not before reminding the reader that somewhere right now there is someone waiting to tickle you.

The words and pictures in all the Mr. Men and Little Miss books are simple (and I use the term book loosely here as they are no more than a 5X5, twenty-odd paged paperback) and, truthfully, there’s not much to the stories. And yet after my daughter and I finished Mr. Tickle and raced through several other in the series, I decided these books are some of the most engaging and interactive we have read in a long time.  Mr. Tickle turned into a tickle fest because I couldn’t resist finding a new nook or cranny to tickle every time that word was uttered (and it is uttered quite a bit). And there is something truly encouraging about this cheerful bubble man who simply wants to spend his day spreading happiness.

There are several dozen Mr. Men and Little Miss books, all capturing small snippets in the life of another personality-trait character and usually they teach little important messages.  Take Little Miss Sunshine – she enters Miseryland and is arrested for the serious crime of smiling.  A few pages later, she’s taught the king the power of laughter and happiness – what a great message for kids.  And then there’s Mr. Grumpy, such a curmudgeon, grumpy all day long – until Mr. Happy and Mr. Tickle start following him and tickling him, until by the end, he’s still grumpy, just not so much and he only tears one page out of his book.

The Little Men and Little Miss books are not to be ignored, as I did.  They are best suited for 6 and up – and best shared together with your children.  Get noisy with Mr. Noisy, grumpy with Mr. Grumpy and get out your tickle monster with Mr. Tickle.