Let’s Play in Italian is the first New Jersey State bilingual preschool and kindergarten licensed to teach both English and Italian.

Catiana Celentano, founder of “Let’s Play in Italian,” and the L.E.C., Language and Enrichment Center, a non-profit 501c-3 that offers a variety of classes, has been teaching children Italian as a second language since 2005. Starting in 2017 the L.E.C will now offer Spanish as a second language. Since opening, the Let’s Play in Italian has expanded to a full and half day preschool and kindergarten with FREE before and aftercare. With the help of supportive and patient teachers, children ages 2 ½ to 5 years old will learn not only their ABC’s and 1-2-3’s, but also develop a strong understanding of the Italian language and culture. Included in your child’s day is our English lab which prepares the children to be ready for English elementary school.

Celentano says, “We believe that each child is unique and has an individual learning strength that we use to our advantage in the small class sizes. Given the immense amount of benefits children gain from learning a second language, why not have them learn Italian, a beautiful language, in a fun and nurturing environment?” Studies have shown that bilingual children out perform their monolingual peers in many aspects. Bilingual children have been shown to be better communicators, have heightened cognitive ability, and be better problem solvers. They are more spatially aware, more empathetic, and more flexible in their thinking, and their working memories can sustain greater demands than the memories of children who only speak one language. In addition, they show higher levels of control and can better adapt to both logical problems and complex social situations.

It is crucial for children to learn another language when they are still young. Studies have shown that between the ages of 8 and 12 children lose the ability to learn and produce new sounds: any language learned after this age will be accompanied by a permanent accent. Children’s brains are wired to easily learn new languages, allowing them to develop fluency in any language they are exposed to. Some parents worry that their children might become confused when exposed to multiple languages, and believe that this delays the speech of a child. However, a study done by the University of Washington revealed that babies are able to differentiate between two languages even before they can speak.

The learning of another language is greatly beneficial both in childhood and later in life. Those who are bilingual have better memories and maintain their mental capacity longer than adults who only speak one language. Bilingual children have been found to have higher intelligence, score higher on the SATs, and have better multitasking skills. Being fluent in multiple languages ensures diverse cultural knowledge, and thus bilingual people are able to view issues from different perspectives; this ability is critical when facing issues in our international society. It is crucial to expose our children to other languages during their prime learning stage, because being multilingual provides an edge unattainable to those who only speak one language.

We Found These After School Activities for Kids

Looking for After School Activities with Artistic Flair? Whether dance, music, acting or drawing,… 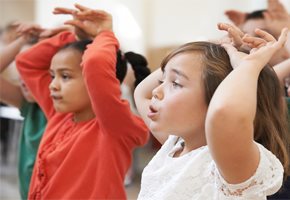 Guide to Performing Arts and Theater Classes for Kids in NJ

Enrichment Programs for Acting, Singing, Theater and more... Do you have a budding actor or singer…