Welcome to one of Westchester's top kids attractions and one of the world's biggest boxes of LEGO® bricks!

FOR NJ KIDS ONLY: 20% discount code on admission!

LEGOLAND Discovery Center Westchester is a 32,300 square-foot indoor attraction featuring millions of LEGO bricks, geared towards children ages 3-10 and their families.  Its range of educational and interactive attractions will include hands-on play areas, a 4D cinema, classes led by Model Builders, two LEGO rides, special birthday party rooms and MINILAND — the venue’s signature re-creation of landmark locations and buildings throughout Westchester County and New York City, made entirely out of LEGO bricks.

For the first time ever, LEGOLAND® Parks are offering a first look at an exciting new theme park attraction that reunites the stars of "The LEGO® Movie™" in an all-new story appearing exclusively at LEGOLAND® theme parks and LEGOLAND® Discovery Centers in 2016.

The 30-second clip released today gives fans the first glimpse of what happened after the blockbuster movie, when Emmet, Wyldstyle, Unikitty, MetalBeard and Benny reunite at the invitation of a shady new character, Risky Business, who plans to open a curious theme park bearing a suspicious resemblance to LEGOLAND®.

Returning to voice their iconic characters are actors Elizabeth Banks (Wyldstyle), Nick Offerman (MetalBeard), Charlie Day (Benny) and Alison Brie (Unikitty). Actor, writer and comedian Patton Oswalt lends his voice to the scheming Risky Business, whose Evil Secret Plot requires the heroes to call on the Master Builder skills of a surprise ally to save the day.

The short 3D film will play several times a day at each LEGOLAND® site, with "4D" effects such as wind, water, fog and more bringing the action bursting off the screen and into the audience.

Los Angeles-based Pure Imagination Studios is creating "The LEGO® Movie™ 4D A New Adventure" with input from Phil Lord and Christopher Miller, the talented writer-directors who brought "The LEGO® Movie™" to life, along with contributions from Rob Schrab, who is directing the movie's eagerly awaited sequel, due in 2018.

FOR NJ KIDS ONLY: 20% Discount Code on Admission!

Click on tab titled “Promotional Code” and when prompted to input MB16005 and the discount will be added to their order. 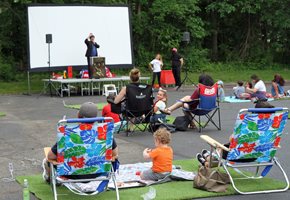 Outdoor Family FUN begins at Imagine That!!! for Summer 2020 As NJ reopens, Imagine That is…